What does Yoshimura mean by “sugar” in chapter 92?

On chapter 92, there's a conversation between Yoshimura and Roma inside Anteiku that goes like this:

Yoshimura: What do you have to be careful about in both "the coffee you served to ghouls" and 'prostitutes on street corner'?
Roma: ??
Yoshimura: "Sugar"
Roma: ...... what? (confused) 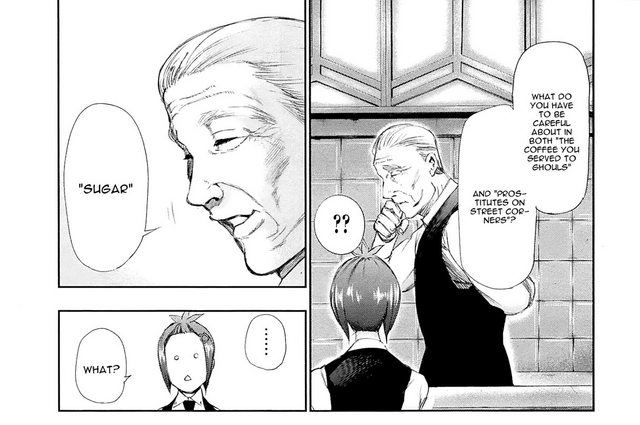 This joke went right over my head when I read this chapter. If someone could explain it to me that would be great.

As stated on Wikia, the original joke is about "serving coffee for ghouls" and "man on a (baseball) base". The original script goes like this:

"Serving coffee for ghouls" and "slow-footed man on a (baseball) base"... is "to refrain from tourui".

Here, tourui is either 糖類 (saccharides; sweeteners) or 盗塁 (base stealing; steal; stolen base), which basically means:

Since this Japanese wordplay is almost impossible to be translated properly (and the joke itself is quite technical), I believe the translator changed it so that joke can be understood easier while trying to preserve the nuance for "sweetener/sugar" and "serving coffee for ghouls".

... as for the meaning of "sugar" in the translated version, it probably means:

I believe the sugar is a reference to cocaine. If you look at pictures of crack cocaine, it kind of looks like an off color sugar

Not the answer you're looking for? Browse other questions tagged japanese-language tokyo-ghoul or ask your own question.

62
What does 'moe' mean?
11
What does “tsukkomi” mean?
1
What does the note from chapter 14 say?
5
What does “dog's circle” mean?
7
What does Midorima Shintarou's “-nanodayou” mean?
2
What does Onii-Chan mean?
1
At the end of Tokyo Ghoul: Root A, is Yoshimura still alive?
1
What does Ghoul mean in japanese?
0
What happened with Iwao Kuroiwa and Yukinori Shinohara after the battle against Yoshimura?
0
Did Yoshimura cannibalize after becoming “a good guy”?