What was the terrible artwork on the flyer in episode 1?

At the end of episode 1 of Choujigen Game Neptune - The Animation, Compa and IF are handed a flyer with some extremely ugly artwork. 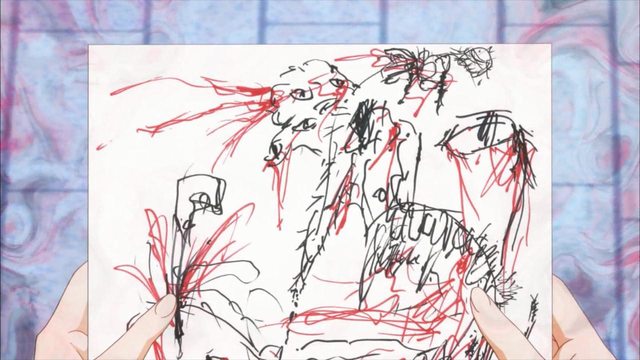 What is this flyer?

The character who hands the flyer to them is Rei Ryghts who is voiced by seiyuu Kobayashi Yuu. Apart from being a well-known voice actor, Kobayashi is also known for her strange and disturbing art style, exclusively using black and red and with only a very coarse resemblance of anything real. This has been covered by many news sources even in English, including Kotaku five times (so far), Crunchyroll (and again here), and dozens of blogs and lesser known sites. This image is just another example of such drawings, included as a comedic reference which many viewers would catch (at least in Japan).

As for any in-universe significance, this does not seem to be important in the anime. A similar event occurs in the third Neptunia game, but as the anime is following an original story line loosely based on the games. The scenes after the credits in this show are humorous bloopers or extra scenes related to that episode but not to the overall story. In both episodes 2 and 3 (the next one with IF and Compa) neither the flyer nor Rei makes any appearance, so it's pretty safe to conclude that this won't be important for the overall plot.

1
Who is Macaroon?
6
Is there any correlation between the CPU and CPU candidates' oppai sizes like there is with KanColle?
19
What are the real-life origins of CPU and CPU Candidates?
8
How different is the story of the Hyperdimensional Neptunia remake?
2
In what order do the Hyperdimension Neptunia games go (including the animation)?
1
What is the connection between Cave being nimble and nothing being able to touch her “hitbox”?
1
What is this Doc Tear Popper MAGES is looking for?