Who are these strange people at Moriko's door supposed to be?

In episode 11 of Net-juu no Susume (the OVA), a tense moment between Moriko and Yuuta is interrupted by someone ringing the doorbell. And, uh, it turns out to be these peculiar people: 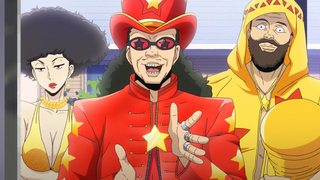 They ask Moriko if she believes in aliens before she slams the door in their faces.

Judging from the distinctive costumes, I'm guessing this is some sort of common door-to-door annoyance in Japan, kind of like Jehovah's Witnesses in the US, but weirder. Are these people a representation/parody of some existing Japanese alien-proselytism group?

(Note: the guy in the middle, who is the only one who speaks, is not listed in the credits. That was clearly Nakamura Yuuichi's voice, but he's only listed as Kanbe's voice actor.)

Browse other questions tagged recovery-of-an-mmo-junkie or ask your own question.