Why does Togame's eye change?

Sometimes in the series, Togame's left eye becomes purple with a cross inside. Is there a reason for that? 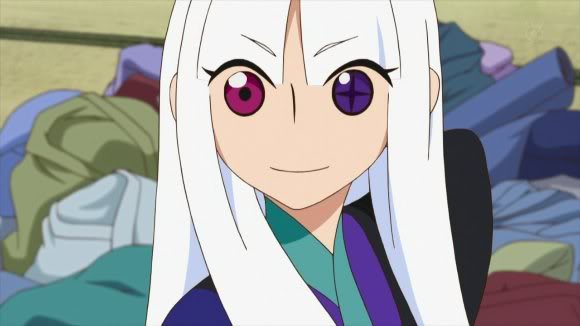 Though not thoroughly explained, the Katanagatari wiki mentions that it's a result (along with her hair turning white) of witnessed the death of her father.

It's been mentioned (by various Japanese BBS sources) that the cross-shaped eyes were the idea of the original illustrator (of the light novels) and not of the author.

The eye that witnessed the act takes on a snake-like appearance when she is scheming. One of the Maniwani notes that it "shines with ambition".

You could say that the root of ambition that Togame shines with is revenge, since her eyes return to return to normal when she's scheming her ultimate revenge plot.

Togame's left eye changes whenever she is scheming or in an ambitious state of mind. This first began when she witnessed her father being killed, at the same time that her hair turned white. I do not believe it is explained why this change takes place beyond that witnessing her father's death changed her view of the world, but it could be elaborated in the novels.

It's also worth mentioning that Togame's name (とがめ) in Japanese is probably a reference to this eye, though it can be read in many ways. The particular reading here would be 十が眼, which could be interpreted as "eyeball shaped like 十 (to; the character for the number 10)". This is fairly unorthodox Japanese, but it's clear that this was one of the readings that the author intended.

Of course, Togame is the fake name that she made up for herself after her father died, so she wasn't called that until she got her cross-shaped eye. Before that, she was named Yousha (容赦). This is likely a counterpoint to another interpretation of her name, since 容赦 means forgiveness, while 咎め (とがめ) means blame or rebuke, which is fitting given how that incident changed her life towards seeking revenge.

3
What is Shikizaki Kiki's final completed Deviant Sword?
5
How does Pengin die in the fight with Emonzaemon?
3
Did Shichika's father try to kill Nanami?
6
Why does Shichika allow Princess Hitei to travel with him?
2
Why does Shichika's sister sit off to the side behind a column?
1
How does Hōō Maniwa regain his left arm?