In episode two of Danganronpa, two characters die. On both cases the blood appears in pink, rather than red. 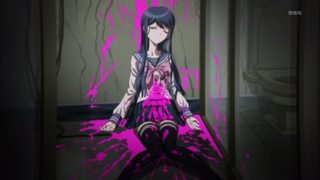 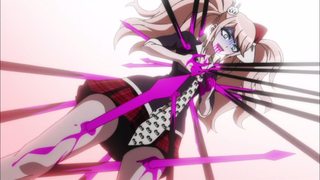 Why is this?
Is blood in the Danganronpa universe pink? Or is this supposed to be less shocking for the viewer or something similar?

According to the Something Awful playthrough thread for the game:

Because of the intricacies of the Japanese game rating system, blood in this game is colored pink. Rest assured, though, it is human blood you will be looking at, and it doesn't mean our characters are secretly aliens or elves.

Many murder scenes are liberally splattered in Pepto-Bismol, thanks to the intricacies of the Japanese game rating system.

So it seems like making the blood realistic would have given the game a higher age rating, possibly restricting some of their target demographic from being able to purchase the game. But the pink blood also goes along with the main artistic style of Dangan Ronpa.

To add to atlantiza's answer, Danganronpa is rated D (17+) by CERO, Japan's rating board for console video games. That's the highest rating which does not carry additional legal restrictions as to where and to whom you can sell it. Danganronpa is a console game, and it's very likely that the consoles would not have approved of it had it been rated Z (18+), but including red blood would have likely pushed it over this limit. Very few games rated Z ever get released, with the exception of a few violent games produced overseas where the ratings are less strict for violent content (e.g. in the U.S.).

Most visual novels are PC games, so they are rated by a different organization from CERO, namely EOCS. EOCS doesn't have the same restrictions against displaying red blood, but most of them are guaranteed an 18+ rating anyway for inclusion of sexual content. An 18+ rating from CERO has a much bigger impact in terms of sales than one from EOCS. It's not uncommon for Japanese console games to not include blood at all to avoid getting higher ratings, but Danganronpa obviously didn't have that option so they did the next best thing.

As for why they kept the blood pink in the anime, it is sort of iconic at this point. The death scenes (so far) have all been very closely following the style of the game. Changing it would probably turn off fans, and the pink blood does fit well with the art style.

It's because of its "psycho-pop" art style. They used pink blood for their art style type, and also censorship probably. Also, they coined the term "psycho-pop".

Also, fun fact, the blood at one point was planned to be red (it was in DISTRUST, the beta version) but when Monokuma's art design was chosen, everything was changed, even the blood.

I personally think it's for moderation and censorship. The creator of Danganronpa said that the game had to go through a bunch of approval before the game could come to the US. Naturally, if the blood was red, the game wouldn't have made it through. Also, the ratings. If it were to be red, they would make the game go towards even more mature audiences. In my opinion, teenagers seem to play this game, but they aren't as traumatized because the blood is pink and they know it isn't real.

Because of the intricacies of the Japanese game rating system, blood in this game is colored pink,but the pink blood also goes along with the main artistic style of Danganronpa.

It's done so because when the human mind sees red blood it sets off a red flag in they're brain, but if it's a different color you don't get that reaction.

4
Why isn't blood pink in the Future Arc (Mirai-hen), like it is on other Danganronpa media?

16
Why does Naegi always appear in the closing credits along with the dead characters?
7
What happened to the outside world in Danganronpa?
2
Who were the survivors in Danganronpa?
4
Danganronpa - What is supposed to happen if there are 2 or 3 players left?
14
Order to watch the Danganronpa series? Is there a “Danganronpa 2”?
4
Why isn't blood pink in the Future Arc (Mirai-hen), like it is on other Danganronpa media?
0
Where can I watch seasons 2 and 3 of Danganronpa?