How old is Konoha?

Konoha is said to have a long history and is one of the strongest villages.

I am wondering, How old is Konoha? i know it's older than 30 years old (Boruto) as Naruto's lived most of his life in Konoha and it was around before Naruto was born so to attacked the the 9-Tailed Fox

As other answers have stated, we do not know enough of the entire history to pinpoint exactly how old Konoha is, but we do know some time frames to narrow it down. It would appear Konoha is younger than it appears, and I would say Konoha is no more than 80 years old in Shippūden and barely 100 years old in the Boruto series.

These timelines are not 100% accurate due to guesstimating, but they’re pretty close in regards to the entire timeline as a whole and all 3 points of view line up to support each other.

Hashirama died during the First Shinobi War, which occurred not long after the founding of Konoha

The war started not long after the system of one shinobi village per country was established by the founding of Konohagakure after the Warring States Period.

At some point, Hashirama came to bind most of the tailed beasts and sold them to other villages during the First Shinobi World War, to promote peace and tranquility ... However, this peace was short-lived. Hashirama died during the war shortly after the village began to flourish, and the mantle of Hokage was passed onto his brother, Tobirama Senju, who became the Second Hokage

Ok, we have a start. All it says is "not long", so I would put this time period no more than a few years. During the period of the Warring Ages and the First Shinobi War, as shown in Chapter 619, Hashirama was alive when Tsunade was very little. I would say she is roughly 6 years old at this point. 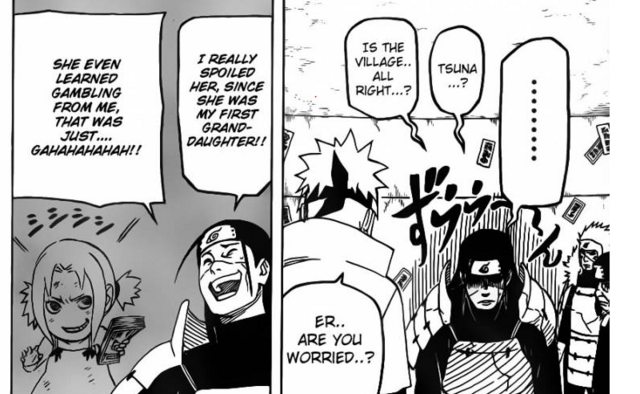 Even then, the peace only lasted another twenty years until the Second Shinobi World War erupted.

Based on the First War's wiki, the final moments of the war mimicked the actual World War I, which leads me to assume the First Shinobi War lasted 4 years.

The conclusion of the First Shinobi World War mirrors the events that followed the real-life First World War. World War I was ended with armistice, before a treaty was finally signed. ... Nevertheless, within twenty years after the signing of the treaty, World War II would begin.

If we account for that timeframe, this puts Tsunade at ~30 years old during the events of the Second Shinobi War.

We do not know much about the events between the Second Shinobi War and Third Shinobi Wars, but if we skip ahead the beginning of the series, Tsunade is stated to be 51 years old; 55 in Shippūden. This is roughly a ~25 year time skip

Hiruzen early on displayed prodigious talent in the ninja arts, earning him additional training from Hashirama Senju, the First Hokage

This means Hiruzen was alive, but young during the founding of Konoha. Using the same deduction as earlier, Konoha is ~10 years old at the start of the First Shinobi World War and during this war, Hiruzen is appointed to be the 3rd Hokage by the 2nd Hokage.

Tobirama volunteered himself instead, and before going to his death he appointed Hiruzen as Third Hokage

At the time of Hiruzen's death, it is stated that he is 69 years of age, which leads to the assumption that he maintained a life of 46 years after being appointed as the 3rd Hokage.

If we add the starting ~10 year span at the beginning, Konoha is ~56 years old.

Kakuzu is the oldest known shinobi who age is known at a whopping 91.

Trivia: Kakuzu is the oldest shinobi whose age is known.

Kakuzu originated from the village Takigakure, and during the founding of the villages, he was sent to assassinate Hashirama.

Around the time of the village's formation, the village tasked Kakuzu with assassinating Hashirama Senju, the First Hokage

Given how Hashirama was a high valued target, it’s likely Takigakure sent somebody they could count on; somebody older and more experienced. I guess Kakuzu was 20 - 40 years old. Since Kakuzu was killed at the age of 91, and having fought Hashirama around the time of the villages’s founding,

This puts the timeframe of Kakuzu’s battle with Hashirama and Kakuzus death anywhere between 50 - 70 years.

As mentioned in the comments, Konoha was founded by Hashirama Senju and Madara Uchiha. It is difficult to pinpoint the exact age of Konoha. According to Narutopedia, Konoha was founded right after the Warring States Period. The Warring States Period being a time when the countries of the world were uniformly small, constantly battling each other for land, power, and opportunity. During this period, the Senju and the Uchiha emerged as the strongest clans. The war was ended after the two clans united. However, we do not know any concrete chronological information of that period.

The age can be estimated though, guessing at ages of all the Kages all the way back to Hashirama Senju. The wiki doesn't seem to provide and accurate account of the ages of the Kages or the village either. I believe that is just as close as we can get to it.

My guess is, it has to be around 150 years if not a little more than that. Adding up ages of the Third (he died while serving) and a few years from the life of the Second (he was already an adult when Konoha was found) should make roughly a 100 years. Adding up Naruto's age and all, it should add another few years but not more than a 50 (just a guess). So the village should be more than a 100 years and less than 150 years old.

Konoha was founded during the warring clan era by Hashirama and Madara. Now, to have the power and get acknowledged by the other clans to create Konoha, they have to have been somewhere between age 25 to 35. Hashirama's brother, the 2nd Hokage, would have been around the same age too.

In a flashback, we can see that the 2nd Hokage was just around 30 years old when he was killed by the Gold and Silver brothers.

And the 3rd Hokage has been his disciple since being a genin. From this, we can say that Konoha was created just around the same time as when the 3rd hokage was born.

And he was 68, I think, when he was killed by the Snake sennin. Add another 30 years when Boruto takes place.

So totally Konoha is around 110 years old.

2
How did the people in the Naruto Universe forget about their history?
11
How could Naruto twist his ankle?
5
Why does Obito look like an adult during the Kyuubi attack on Konoha?
6
What is the logic behind Madara's plan A for his revival?
12
Why didn't Kakashi take care of Naruto?
9
How does an outsider get “citizenship” in one of the Five Great Shinobi Countries?
0
How old is Naruto in Boruto series?
1
Is Naruto's most proficient move still Shadow Clones?