Why didn't Annie take Eren out of his Titan when she kicked and beat him in the head during their fight in Stohess?

When Annie hardened her leg and kicked Eren in the face, Eren started to bite down on the crystal until Annie started beating him in the head. However, when she was done, she just ran away. That was the perfect time to take him out of his nape and if she'd done so, I believe the female titan would've succeeded.

So, what was going through Annie's mind? Why didn't she take Eren out of his Titan when she kicked and beat him in the head during their fight in Stohess?

There will be a second time skip in the manga, my knowledge is drawn from scenes shown after that.

As it is shown in Reiners memories, Annie is part of team of Marley's Titan kids and they are on a mission, basically doing espionage. But very early one of them gets killed and Reiner convinces the remaining two that they have to come back with something substantial in exchange. In the course of their infiltration they indeed target Eren for abduction, however Annie is exposed without having much of a plan at the time, eventually realizing that Eren may have become a match for her. She is completely within enemies' territory and Levi's squad has shown her the enemy is quite capable of killing her. Having her cover blown was the worst thing that could have happen to her. Annie's primary goal at the time was to retreat and regroup, she was fully aware that any unnecessary action would be an opportunity for the enemy to incapacitate her. She only fought Eren at this point because she was aware he would (and effectively did) prevent her to escape. Maybe she also panicked a little.

However, I can probably summarize with: Fleeing was the most intelligent thing to do at the time.

The scene was very different in the manga

She kicked him and he bit her leg not letting her go and Scouts were on her tail. She managed to somehow free herself by blowing Eren's head with a fist. He escaped from Scouts and Eren was on hair tail a moment later. 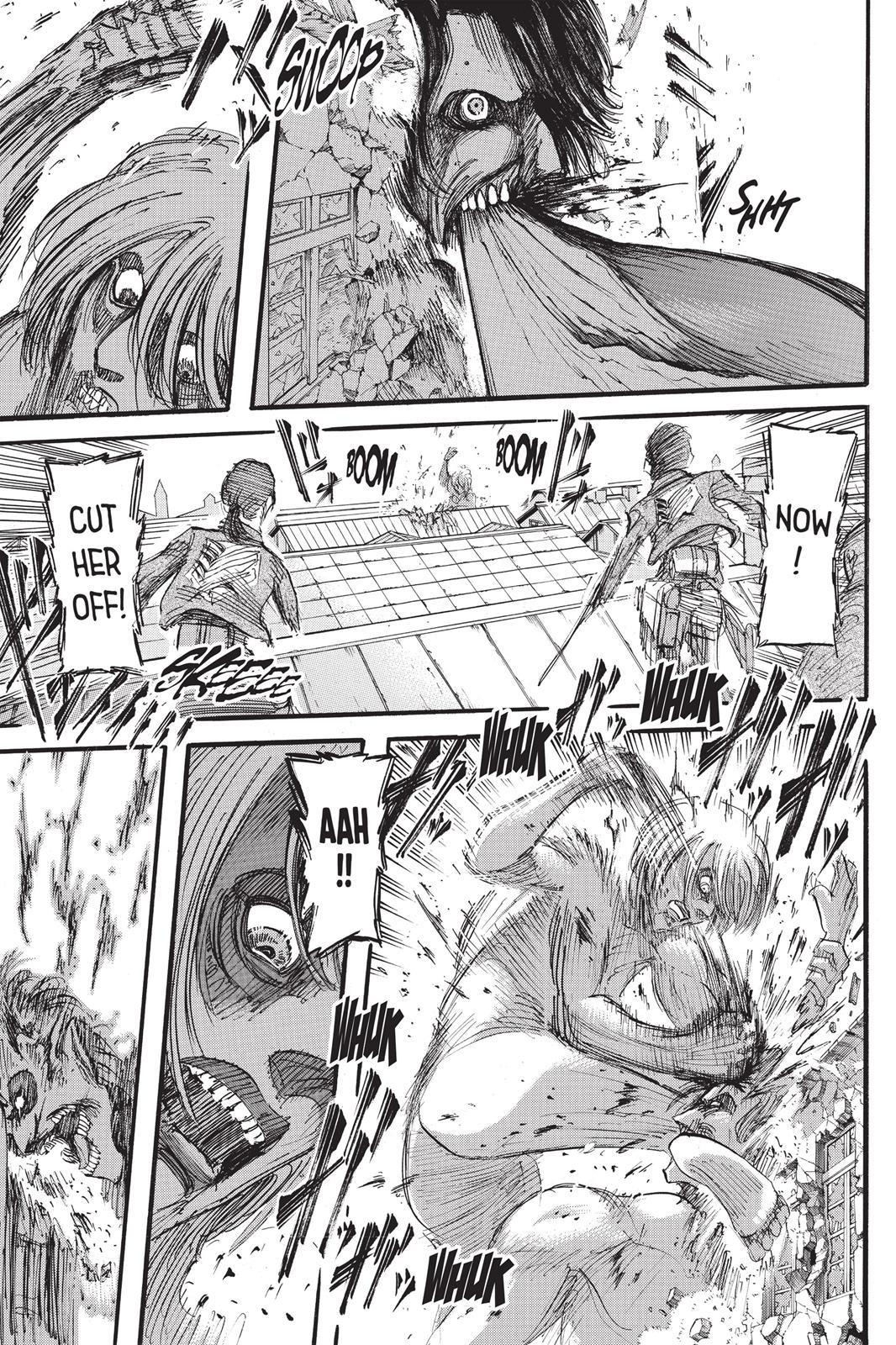 In anime its completely different. It seems like scouts are far away and Eren is completely defeated. Then she's escaping. And Eren, after moment is chasing her down like a mad dog in scene added probably to better foreshadow his titan powers.

So one answer is "it just wasn't adapted well enough from manga". But I don't think that's satisfactory.

Let's imagine manga doesn't exist. Annie just defeated Eren and she could capture him easily. And what then? She is in behind a wall Shina which is the closest one to the center. She have miles until she reaches wall Rosa. which is a middle one. She wouldn't be able to keep her titan form all the way, she would need a break - in this moment Eren would fight back. In other words, there was no chance to escape, not with Eren. Not when she's alone against him

Also, this way she would become Soldiers number one target. Leaving Eren behind maybe she hoped at least some of the soldiers would stay behind to keep him safe.

Also you could argue, that Annie didn't wanted destruction of the city. She definitely shows more concern about civilians then Eren. She is not a good person, but she showed weakness of mercy many times. Who knows, maybe she planned on escaping outside of wall Shina where Soldiers don't have buildings to use to fight her. So if Eren would fallow her, she could easily defeat him. But she didn't realize how strong Eren is and that Mikasa will follow her.

Another possibility is that she saw his green eyes glowing, so she realized he is conscious. If she'd try eating him, he could grab her - and i think we can assume she is fast, but he is stronger. So if he can grab her, its game over for her.

And like other people mentioned, it's possible she was just scared and panicked at this point, but to me it seems a bit out of character for Annie. She is super cold and calm, she showed that while fighting Scouts.

If you look at the Female titans facial expression when she bangs her hands on Eren's head; The look on her face is "fear". As we have seen her mess up from time to time in her titan form; She was too scared to stand up to the Rogue Titan (is what i like to call him).

I think it’s deeper than that. Notice when she put her ring on before going with Armin, suggests she knew what was coming and decided to accept it. With the knowledge she had at the time I believe Annie willingly gave herself up to the walldiens in order to be ‘a good person’. She definitely could’ve beat Eren and escaped with him in stohess but chose not too, this is why I think she’ll join the walldiens when she wakes up. In reiners memories it’s seen that Annie despises Marley and sees through their delusions but is in an impossible situation. From all this I extrapolate that Annie chose to leave Eren when she had a chance to take him out of his Titan because she knew what it would mean if the warriors actually succeeded. There would be no room for error, being a warrior, even in a situation as stressful as that, everything would’ve been calculated: leading me to believe in Annie’s convictions.

18
How did the Female Titan cut Eren's titan form?
4
How did the Female Titan manage to get out of her titan form and escape while surrounded by a horde of titans?
7
What happened to Eren that made him unable to turn into a Titan in chapter 53 of the manga?
11
Why didn't the Titans wipe out humanity yet?
10
Where is Eren's father Dr. Jaeger?
14
Why did Eren survive getting eaten?
7
Would Historia Reiss become as big as Rod Reiss if she had turned into a titan?
6
How can Levi be so fast when approaching the Beast Titan's nape in season 3 part 2?
1
Why didn't Marcel or Frieda Reiss transform when being eaten?