Why did the Strawberry Panic manga end?

I picked the so-called 'complete collection' of Strawberry Panic at a convention. Upon reading it however, I found the story wasn't actually complete (stops just as the 'faceless devil' event is announced) and closes with an "..end?" even though nearly no plot points are resolved and many events are about happen

I've read the light novels, and there's a good chunk of story left. Why was the series stopped so suddenly? 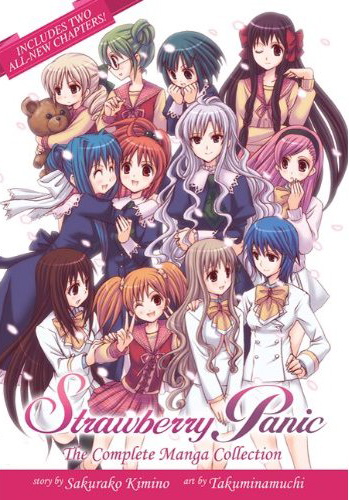 As Jon Lin said in the comment, the serialization got canceled after a long break.

According to Japanese Wikipedia, the manga was serialized in Dengeki G's magazine since edition 2005/11 and it continued until edition 2007/2. On the edition 2007/4, the table of contents listed the series as on break:

Comic "Strawberry Panic" is on break for a while.

However, since there's no sign of continuation for a long time, the serialization got canceled instead.

As for the reason behind the break/long hiatus, it's not stated anywhere (it's a common case). However, I doubt it's "because Sakurako Kimino was sick" since:

Generally, a manga/anime doesn't have to complete the story set out by the original material it was adapted from. Some examples are Accel World, Bleach, and Bodacious Space Pirates.

Some reasons are obvious, like key changes in the plot making it impossible to follow the original plotline set out in the source, while other times it's not so obvious such as events involving members of the production team, such as work disagreements, licensing problems, or people getting sick for an extended period of time.

This isn't just for adapted works as these problems can affect the source material: Kaze no Stigma's light novel has been left incomplete due to the author dying.

Not the answer you're looking for? Browse other questions tagged strawberry-panic or ask your own question.

0
When does the Strawberry Panic novel occur relative to the manga?