Are there other English versions of weekly manga magazines besides Shonen Jump?

I know that Viz translates the Shonen Jump magazine as it is released, but I'm not a massive fan of shonen, so I was wondering if there are any other manga magazines that are/have been published in English? 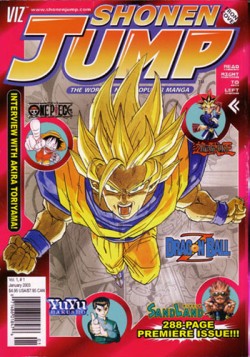 I had asked a similar question in chat a little while ago and did some research myself on the subject.

Viz no longer publishes Shonen Jump, as it has gone entirely digital. Viz also used to publish Shojo Beat which ended its publication run in 2009. Before that, they published Manga Vizion (1995), a manga anthology that ran for 4 years, Pulp (1997), which was the same thing but aimed at adults and ran for 5 years.

More general publications like Animerica or New Type USA (by A.D. Vision, counterpart of the Japanese "New Type" magazine) contained news and some serialized manga. When A.D.V shut down, the magazine was replaced by PiQ, which was even less about anime/manga and only lasted 4 issues. There's also Anime Insider published by Wizard which contained some manga previews but it's mostly a news magazine and Protoculture Addicts published by Protoculture, Inc. which covers anime and manga news and is readily available in Europe. It's now part of Anime News Network.

I think the only manga magazine that's still in print today is Otaku USA which claims to publish 32 pages of manga previews. According to its wikipedia page:

After the shutdown of NewType USA in February 2008, Anime Insider in March 2009, and the discontinuation of Protoculture Addicts since August 2008, Otaku USA is the only remaining anime news magazine published for the North American market.

Since it only contains previews of manga, it's not a viable option if you want serialized publications of manga in English.

Not the answer you're looking for? Browse other questions tagged shonen-jump or ask your own question.

6
What are the instances where a Weekly Shounen Jump serialized manga would not be released in a given week?
2
Was there an early preview of Kagamigami or a similar series in Shonen Jump?
3
How can I subscribe to Weekly Shonen Jump outside Japan?
5
Why are there two different versions of how Luffy ate the Gum-Gum fruit?