Before Mikami committed suicide, was he still having faith in Kira?

At the end of Death Note, after Light is revealed as being Kira, Mikami goes on a little rant after their plan failed thanks to Near having switched the real Death Note. After that, however, Light denies knowing anything about Mikami.

After Light is shot several times by Matsuda Mikami then stabs himself with his pen, the fountain of blood and yelling grabs everyone's attention and as everyone goes to try to treat him, Light escapes.

However when Light denied knowing Mikami, Mikami looked depressed as if he had just been betrayed by his "god", but his suicide gives Light a distraction to flee.

So before Mikami committed suicide, was he still having faith in Kira?

He had a lot of faith in Kira. So much so that he was even willing to sacrifice himself because he considered Kira as "god". Like Kira, he also has a strong sense of justice to punish evil.

During the warehouse scene, he had complete faith in Kira's plan. He was 100% sure that Kira would succeed and reign as the "God of the New World". But as all viewers who have finished Death Note know, Near outsmarted Kira.

Near asked one of his colleagues, Gevanni, to replace the Death Note in Mikami's locker. Because Mikami had a very predictable schedule pattern, this in turn, was also the downfall of Kira.

Seeing Near outsmart him, Kira snapped and began to disown Mikami. Showing his incapability to turn the situation, Mikami began to doubt Kira... that he was just indeed, Human.

Fun fact: Mikami's death is very different in the manga. In the anime, he was shown to stab himself with a pen and died of blood loss. In the manga, he was imprisoned and then suddenly died. Matsuda began to suspect that Near killed Mikami.

TL;DR: Mikami had 100% trust in Kira before the warehouse scene. Kira snapping out/disowning him/being unable to turn the situation made him lose faith in Kira.

As mentioned there's kinda quite difference between the Anime and the Manga, once we will realise what made the the difference we will also realise that there's no difference.

In the Manga, the creators gave Light hell of humiliating death, after Light shout to everyone he knew and trusted (like in the anime) he's asking from Ryuk to write his name in the Death Note and then he's dying begging for his own life, but before the part he's shouting to to Misa and Takada, he's also shouting to Mikami, and he's responding, unlike the anime. 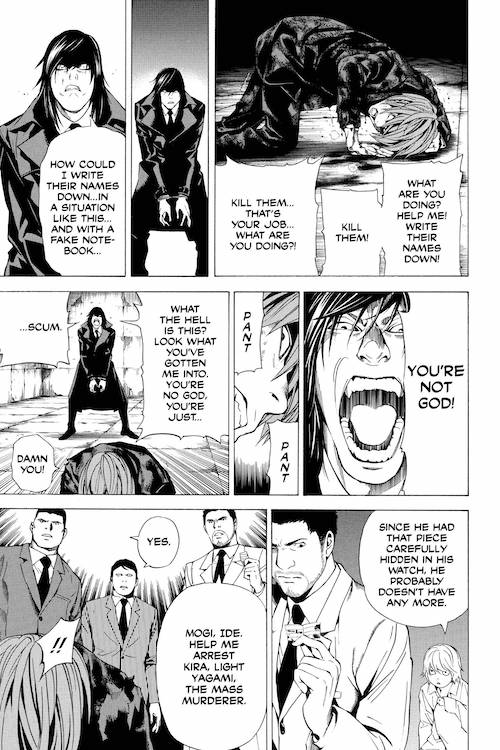 Mikami part in the Yellow Box wear house is ending after this, and in the last chapter it's been said Mikami had been suicide while in jail.

In the Anime on the other hand, to give Light much more less humiliating death, when Mikami sees Light lies in his own blood, he's stubbing himself with his own pen, the part where he talks to Light however is cut, the only clue to see his own feeling is this scene. 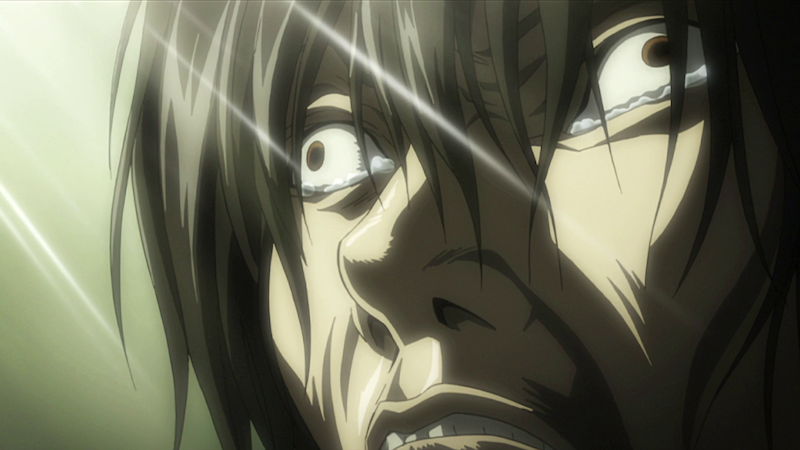 Except for Mikami suicide letting Light ran away from the ware house from his pitiful death in the manga, we can assume something much more that that scene - Mikami is so disappointed from Light, he was his god for every meaning, his psychological shock from sees his god roll-in in his own blood, gave him big mental shock - how can be his beloved god can be so humiliated? MadHouse clearly wanted us to understood that from that scene, in fact, his suicide scene in the anime make much more sense in the psychological way than in the manga, he dedicate his life for believing that Light is god and then he sees his own beloved "god" swimming in his own blood, there's no bigger mental shock than this.

To come and say that the anime cutting that scene for make Mikami not disappointed is exaggerate, Mikami sure looked disappointed from Light when he denied him, but after that Light talked to him about his mistake so he may regain his faith in him, but saying Mikami made suicide to let Light ran away is also exaggerating, human that reached to level where he decide to make suicide usually make those awful choices from hating their own lives and depression, not from some kind of "I will suicide to let him ran away", especially not from the look of Mikami before his own suicide, he clearly were not only disappointed from Light, but felt disappointed from his life for dedicating it for that god that swimming in his own blood, and I think it is clear enough.

In my opinion based on the anime he was desperated but didn't lose faith on the mission, maybe he lost a little faith on Raito/Light seeing his no more as a "God", but a person that can fail as all of us. BUT i think (in the anime at least) he killed himself in a desperate way to buy sometime to outdraw the attention so Light AKA "God" could have time to escape.

10
Why was it that Light's father could see Light's lifespan, while Mikami couldn't see it (which allowed him to deduce that Light was Kira)?
8
How did N come to the conclusion that Light Yagami was Kira?