Jotaro vs Dio: How can Jotaro both move and stop time in road roller fight?

I don't get how Jotaro can launch his "oraoraora" against the road roller (7 seconds since time was stopped) and also stop time at the 9th second of Dio's "The World" ability (i.e. just before getting behind Dio).

From what I understand, Jotaro is able to move for 2 seconds in Dio's stopped time because Star Platinum is also able to stop it and they end in the same "stopped time dimension" together. So, I think Jotaro shouldn't be able to stop time after facing Dio's as he has already used his 2 seconds to stop the road roller between 7 and 9 seconds.

If instead "counterattack" and "stop time" are different ability, shouldn't Dio be able to fight back Jotaro?

Jotaro can stop time for 5 seconds and he uses it (refer to time stop) in the 9th second of DIO's time stop, and at this moment, Za Warudo's time stop has been replaced by Star Platinum's and DIO can only move for 2 seconds. He ended up being frozen in the 11th second after Za Warudo was activated, but since it has already been replaced by Star Platinum's (refer to time stop), DIO has used up the 2-second that he can move in frozen time.

I'm gonna try to clear things up a bit better for those who don't understand how Time Stop in Jojo's Bizarre Adventure works.

This is indeed true to some degree. In a technicality, Dio should be able to move like Jotaro can, but this is not the case. Time Stop can allow for multiple stand users to stop time at the same time or at different intervals if they can move in stopped time.

Jotaro can stop time for 5 seconds and he uses it (refer to time stop) in the 9th second of DIO's time stop, and at this moment, Za Warudo's time stop has been replaced by Star Platinum's and DIO can only move for 2 seconds. He ended up being frozen in the 11th second after Za Warudo was activated, but since it has already been replaced by Star Platinum's (refer to time stop), DIO has used up the 2-second that he can move in frozen time. (quoted from previous answers)

There is, however, a theory that Time Stop can overlap if 2 stands use it, thus leading to the effect of Dio being able to seemingly keep moving after his previous limit was achieved. As stated in the Anime, his peak limit of time stop duration was 11 seconds. Seeing as how Jotaro supposedly stopped time for 5 seconds and stopped it at the 9th second of Dio's Time Stop while moving in stopped time, this evidence can support this theory as the visual and audio effects of Time Stop going into effect is only seen when time is flowing like normal.

As for the road roller, I can kinda see why Dio would want to make sure Jotaro is dead by crushing him with the heaviest thing he could find. Like he said, "You can never be too careful when handling with the Joestars." Where he found the road roller is what stumps me.

Counterattack and time stop are the same thing. Jotaro had barely enough time. The second between 7-8 is the ora barrage [1.5 seconds] (it seems like 7-9.5 in the anime because the animators had to fit all the text said in the manga in even though realistically it finishes their time stop just talking.) 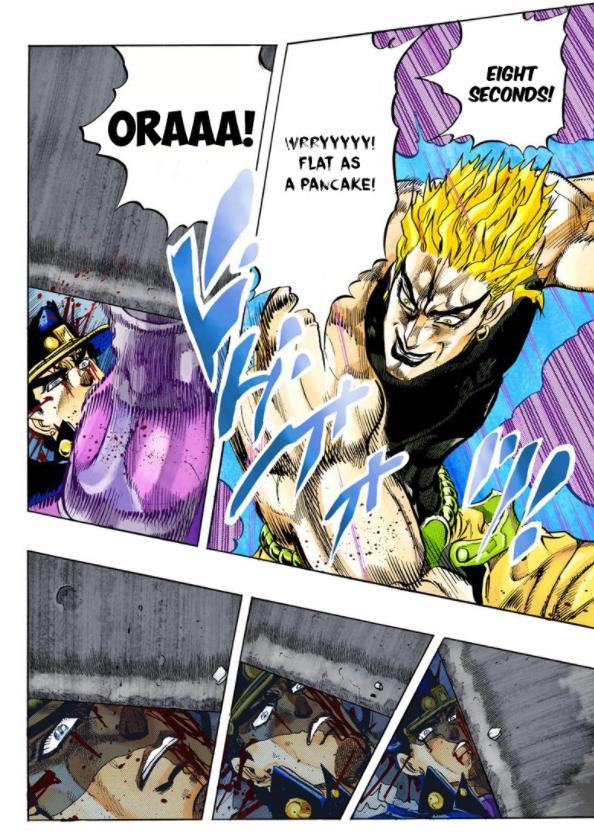 At this exact moment, at 8 seconds, Jotaro resumes his own time, waiting until second 9 so Dio thinks he's dead, and to save some of his own time. I know this because he said, "I stopped time at 9 secondes" meaning time for him was resumed somewhere beforehand. Then he stopped time again and sneaks out of the roller. This takes a second. So far Jotaro has used 2 of his 5 seconds. Jotaro uses another second to get behind Dio [3/5 sec] and one to walk closer to him and wait for him to completely stop moving [4/5]. By now it's second 11 as he stated, and he only has 1 more second to punch Dio, and do any "badass talking", which he does, also he concentrated his power into 1 kick to the shins instead of a weak ora barrage, this is a strategic move because the last time he punched his stomach/head and Dio managed to escape. This takes up his last second.

Also if you are wondering why Jotaro has 5 seconds and not 2, it's because when Dio got Joseph's blood, Jotaro got mad. It's known that how long the time stop is depends on the user's stamina. Dio is a vampire, so he has lots of it. Jotaro does not, but when people get mad and adrenaline is flowing it's known that they got stronger. There are many stories of regular people lifting cars to help their family members from being crushed, and running extremely fast when in danger. The increase in stamina I believe is something like this, maybe combined with the fact the Jotaro may have gotten the hang of time stop and was concentrating more. Also for further proof, Jotaro has explicitly stated that at his "prime" (which is now) he could stop time for 5 seconds.

3
Does Dio or Jotaro have to verbally stop time in order to stop time?
2
What's the reason DIO and Jotaro could fly in Stardust Crusaders?
2
How does Star Platinum get the same ability as the World?
3
How did Kakyoin get hit by The World when he was outside of its range?
1
How come when Dio stops time Jotaro can move but Dio can't when Jotaro stops time?
1
Is Dio's The World actually allowing him to move at the speed of light?
1
If Star Platinum moves as fast as the speed of light, how could Jotaro be hit by N'Doul' stand Geb?