When did Kakashi and Obito awaken their Mangekyou Sharingan?

Also, the Yellow Flash was still alive when this happens, so this means that Naruto was not yet born. This clearly points to the fact that from the very beginning of the Naruto series, Kakashi had his Mangekyou Sharingan activated.

When Kakashi first fought Itachi (when Itachi and Kisame appear at Konoha) and faced the Tsukuyomi he was devastated in a moment, even though he had his Mangekyou Sharingan active (though not used). But the next time they face (during the rescue mission of Gara), he was able to withstand it.

Now for my second question, in the same chapter, a few pages back, just when Kakashi strikes the blow at Rin, Obito's vision starts to fade as he can sense Rin dying. Does this mean Obito's Mangekyou Sharingan was awakened at the same time? We know that Kakashi and Obito shares the same "other dimension" because of the same Sharingan that the both use (not the same eye, but the eye of the same Uchiha). So does the same apply for their activation of Mangekyou Sharingan?

Kakashi and Obito awoke their Mangekyou at the same time: when Kakashi killed Rin. 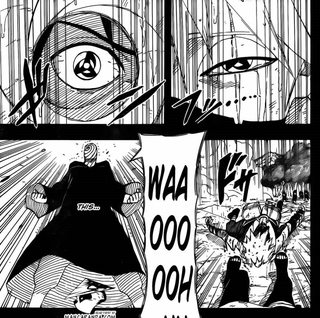 Obito (left) and Kakashi (right) awakening their Mangekyou. From chapter 605, pages 4 and 5.

Now, as for why Kakashi never used it before his fight with Deidara, I think there's no definitive answer. However, I can think of two different educated guesses: one is in-universe, while the other is out-of-universe.

In-universe explanation: As you said, Kakashi was either unaware of or unable to control his Mangekyou Sharingan. I tend to think the former is the case, since he passed out as soon as he awoke his Mangekyou, and probably had no memory of awakening it (Kakashi's page on Naruto wiki seems to agree with this explanation). If this is the case, after his fight with Itachi he most likely tested to see if he had the Mangekyou, finding out he did, and thus trained in order to perfect its use.

Out-of-universe explanation: Kishimoto hadn't thought the whole story through. Since Tobi had not made an appearance in the first Naruto series, Kishi had not yet thought about who he would be. If this is the case, then Kakashi's back story had not yet been planned, as well as Obito's. This would make it plausible that Kakashi was not initially planned to have a Mangekyou, since his is transplanted. After the Kakashi Gaiden, however, the important characters are all introduced, which means he had most likely planned for Obito to be Tobi, and about the link between his and Kakashi's Sharingan.

I think Kakashi didn't use Mangekyou Sharingan before because it took to much chakra. And since he is not an Uchiha, it drained all of his chakra at once. And the next thing about him fainting right after activating the mangekyou for the first time, its the same reason. Exhaustion. No need to explain in universe and out universe blah blah blah. During the gara incident, he used it but had to be bed ridden. Same reason drainage of both physical and mental strength.

8
How could Kakashi use Susanoo?
6
Did Kakashi's sharingan evolve because Obito was watching?
3
When did Obito awaken the Eternal Mangekyou Sharingan?
-2
Is it possible that Kakashi and Obito are brothers?