What is the card that other Yugi draw in the end of the Yu-Gi-Oh movie?

In the movie Yu-Gi-Oh!: The Dark Side of The Dimensions, the true Yugi fainted because the result of the last battle. After Yugi fainted, the other Yugi appeared and he drew a card, summoning one of his priests in Egypt, Mahaad. And surprisingly, he could beat his "last boss" with just one card.

What is the card the other Yugi drew at the final battle? 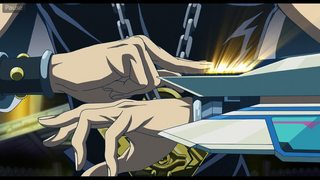 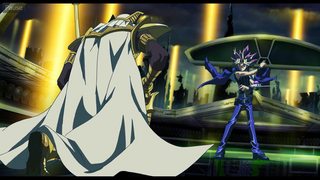 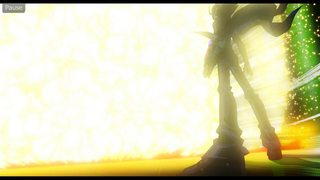 The only card he appears to draw is Palladium Oracle Mahad. As this portion of the duel is not narrated, nor is the 'card's' effects described in any way, there is no guarantee the in-movie card matches its real-life counterpart exactly, but the real card's effects suggest they are played similarly.

Updated answer based on wikia summary

It's all explained in this wiki, see the summary section on that link. Below is the recap when Yugi fainted on turn 4, until he summoned Mahaad.

face-down "Metalhold the Moving Blockade", letting him target any number of Level 4 Machine-Type monsters he controls and Special Summon "Metalhold" as a monster (0/0) in Attack Position, then equip those monsters to it to increase its ATK by the combined ATK of the equipped monsters. "Silver Gadget" and "Gold Gadget" are equipped to "Metalhold" (0 → 3200).

"Metalhold" prevents other monsters from being targeted for attacks, so the attack is redirected to "Metalhold". As a monster he controls would be destroyed by battle, Aigami activates his face-down "Cubic Defense", preventing its destruction and letting him Special Summon two monsters from his hand with the same name.

As two of his "Crimson Novas" destroyed monsters by battle this turn, they may both attack again via their effects. They attack directly, but Yugi activates his face-down Continuous Trap Card "Spiritual Swords of Revealing Light", letting him pay 1000 LP to negate an attack. He pays 2000 to negate both attacks (Yugi: 2800 → 800).

Aigami activates his face-down "Unification of the Cubic Lords", letting him Fusion Summon a "Cubic" Fusion Monster using monsters from his hand and field as Materials. He fuses his three "Crimson Novas" to Fusion Summon "Crimson Nova Trinity the Dark Cubic Lord" (4500/3000) in Attack Position. "Crimson Nova Trinity" attacks Yugi directly, with its effect activating as it attacked, halving his opponent's LP (Yugi: 800 → 400; Kaiba: 2000 → 1000). As an opponent's monster declared a direct attack with a monster whose ATK is greater than or equal to his LP, Kaiba activates his face-down "Krystal Avatar", Special Summoning it as a monster with ATK equal to his LP (1000/0), then changing the attack target to it. "Krystal Avatar" is destroyed (Kaiba: 1000 → 0).

At this point, Yugi cannot continue, but Atem returns to the world and takes over.

Atem draws "Palladium Oracle Mahad", then Special Summons it (2500/2100) in Attack Position via the effect of "Clear Kuriboh", redirecting the attack to it. "Crimson Nova Trinity" attacks "Mahad", with the effect of "Mahad" activating as it battling a DARK monster, doubling its ATK (2500 → 5000). "Crimson Nova Trinity" is destroyed (Aigami: 4000 → 0).

Not the answer you're looking for? Browse other questions tagged yu-gi-oh .

3
Who are "those guys from Season 4" that Yu-Gi-Oh The Abridged Series references?
8
What is the highest-level monster card in the Yu-Gi-Oh anime?
7
Did Yugi duel against a prerecorded Pegasus or the real one?
4
Does the Heart of the Cards work for anyone or just Yugi?
0
What would happen if a duelist didn't follow the instruction on the card?
4
Why was the Osiris Egyptian God Card translated as Slifer the Sky Dragon?
2
Has there ever been a duel, where Yugi used every existing card right?