Are there any studios with good working conditions?

I've heard a lot of horror stories about how animation studios don't treat their employees very well (or just Japan's corporate culture in general), giving animators poverty wages, overworking them and stressing them out to the point where some commit suicide (there's even a word for that, which I don't remember). Apparantly, animators are treated like dirt over there, even though the bulk of the work comes from them. Is there any truth to that? And if yes, are there any studios with good working conditions? I'm talking mainly about pay, reasonable work schedules and good compensation.

In ANN there is an article, written by Jennifer Sherman, which talks about the financial and working condition issues present in the Anime industry. More specifically, the article talks about a specific episode from a NHK program called Close-Up Gendai+.

Below are quotes from the ANN article which talk about the financial and working condition issues that were aired on that specific episode,

An interesting point to note from the article is following,

The program presented Polygon Pictures as a studio with better operations. The studio, which focuses on 3D animation, turns off its lights at 10:00 p.m. to encourage workers to go home. 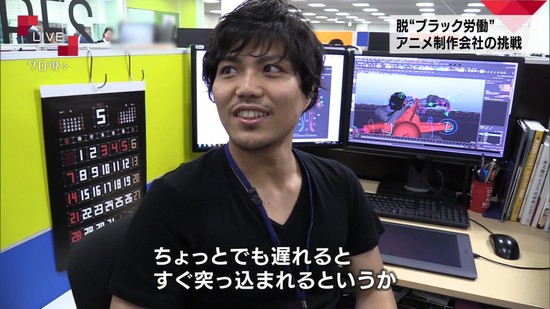 There is also another article by Brian Ashcraft, from Kotaku, which details an interview with Thomas Romain, a french animator, and his experience in working in Japan.

Below are quotes from that article that I thought might be useful. Note, I have also highlighted the ones that are relevant to help you answer your question.

From what I have researched, I can somewhat say that there are probably only some studios which have a bit more better working conditions than other studios. But, overall, I think most studios have subpar working condition and some even lower.

Kyoto Animation is the gold standard for anime production when it comes to worker's treatments.

First, they finance and take total control of their projects, instead of just contracting out to a publisher. This is a big gamble on their part, but it has consistently paid off. A "bad selling" Kyoto Animation show like Nichijou still sells enough (close to 8k units of per-volume sales) to make most studios jealous, and their hits break 50k per-volume sales.

Then all staff are salaried. Since they aren't being paid by-the-cut, the animators are encouraged to take the time to do quality work.

The time budget is also on a longer scale than most. They often start production years out, so you don't see a the half-finished episodes or delays during the anime season. Violet Evergarden was in production nearly a year out while some studios are still working on an episode the day it airs.

Finally, they actually invest in their talent. KyoAni has an art school for new animators, and they hire the best of each class into the studio. They also founded a literature prize to promote new young authors, and to create a story pool to draw from. This was the origin of Sound! Euphonium, a novel Kyoto Animation promoted.

Studio SHAFT it another studio that seems good to work for. They consistently hire the same talent. Most of the same key animators and animation directors have been around since 2004. Artistically they're a very liberated studio, and even junior staff are allowed to run with their ideas. The flipside of SHAFT is a crazy work schedule. They have so many projects, and often with the same staff on all of them. It's almost a tradition to not get things done on time. They are another studio, like Kyoto Animation, that has invested in creating a permanent in-house production capability, with the dedicated Digital@SHAFT division that does both in-house digital compositing and also contracts on everything from Gundam to the Sword Art Online movie.

EDIT:Here's an English Language link to the corporate philosophy page for Kyoto Animation.

9
Are there any foreign seiyuu that have been credited for anime work?
8
What are the animation studios outside the Tokyo area and why the majority is concentrated in Tokyo?
38
Have there been any anime with actual product placement?
9
Is there any relation between hair style and character's personalities?
14
Are there any anime series with neither an opening or ending song?
2
Is there any Anime/Manga adaptation with source material from outside of Japan?
4
Is there any Japanese anime with a Korean OP or ED?