Why is Monokuma's body half-black, half-white? 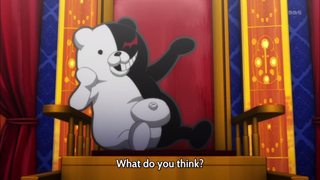 Monokuma's name (モノクマ) is a pun on the word monochrome borrowed in Japanese (モノクロ, or sometimes モノクローム). As you can see, all but the last characters match in Japanese. Presumably that's why he's (almost) totally white and black (monochrome).

As for whether the different sides mean something, in the original game when he talks to you, which side is mostly facing you changes depending on what he's saying. When he's saying things that are especially violent, suggestive, or otherwise evil/despair-inducing his black side is primarily visible. When he's pretending to be a nice good headmaster bear, he'll be facing you with his white side, often holding a flower. A lot of the time for just ordinary talking he'll be facing strait-on. This is very obvious in the game, but somewhat less obvious in the anime as it seems to be hard to animate the switches. I do not think that the fact that his belly button is white is in any way significant.

Here are images of these three cases from the game. He makes a lot more expressions in the strait forward position, such as his angry or nervous expressions, but for brevity I've only included one:

This answer may be incomplete, since it doesn't give an in-universe reason for Monokuma's color scheme. If any reason exists, it would likely be explained in the prequel novel Danganronpa/Zero*, which I haven't read.

*As a note, if you want to avoid having the ending of Danganronpa spoiled, I would not recommend looking for information on Danganronpa/Zero, as it will spoil nearly everything.

When you finally meet the true Junko Enoshima in the last trial, she says something to the effect of "Hope and Despair are like two sides of a coin, they can never be separated." She designed Monokuma in a way where Hope (White) and Despair (Black) were two sides of a coin, or bear. The red eye represents evil and bloodshed, which makes a lot of sense. The belly, that's just for show... or maybe it's foreshadowing for the end. (SHSL Hope FTW!)

The reason why is probably because black and white are opposite colors. It shows how Monokuma is evil, but he kept them in the school for entertainment and so they could live. Maybe it shows how he's good and evil. I heard that the white side represents hope and the black represents despair. Also when I think of hope, a light type of color pops into my head like the color white or a light pink. When I think of evil, despair, or loss of hope, I think of a darker color like black or a dark purple.

THIS IS A THEORY WHY HIS COLORS ARE THE WAY THEY ARE. 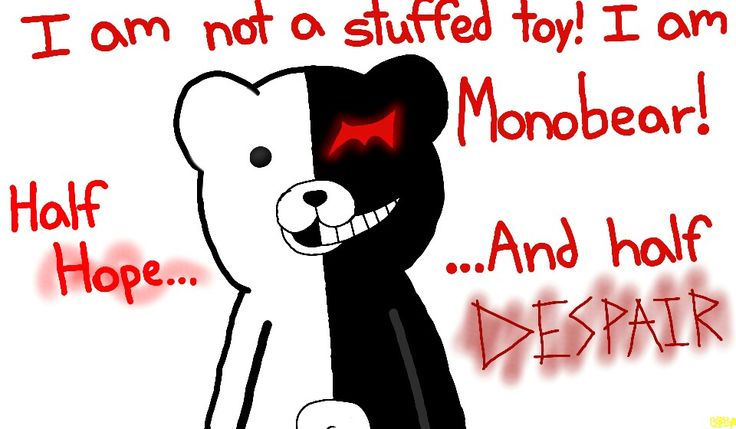 I will give you some spoilers to ask your question:

Junko and her sister had 2 plush bears: her sister had a white bear and Junko had a black bear. When Junko was thinking on a design for her robot, she remembered their bears and fused them together in a drawing. She liked the design and called him Monokuma.

Hope you liked the spoilers!

17
Why is blood pink in Danganronpa?
16
Why does Naegi always appear in the closing credits along with the dead characters?
5
Why do their nicknames include “Super Duper”?
7
What does Monokuma's Morse code theatre translate to?
11
Why is the Monokuma's eye in the school crest?
4
Danganronpa - What is supposed to happen if there are 2 or 3 players left?
0
Who is to say if someone is 'murdered'?
4
Why isn't blood pink in the Future Arc (Mirai-hen), like it is on other Danganronpa media?
1
Why does Naegi call Togami “kun” and Aoi “san”?