Is Clare able to detect Yoma aura due to Teresa's flesh and blood being the base of her power, or because she honed this ability to a cutting edge?

Teresa had the ability to detect Yoma aura, allowing her to accurately predict an opponents next action. Later in the series, Clare uses the same technique to battle the male awakened being. Is it because she became a claymore using Teresa's flesh and blood, or did she hone this particular technique to a cutting edge specifically for the purpose of battling Yoma? 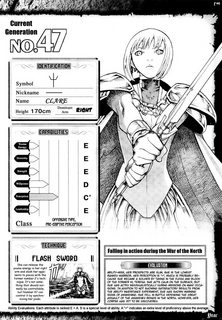 These are Clare's official data book stats for when the series starts (up until the battle in the north), from the perspective of the organization. She has the lowest possible rank in nearly every stat, except a D in Willpower and a C+ in perception. It contains the following two facts about her perception:

A "+" indicates an extra level of proficiency above the average.

Her perception is "+", which is probably because she became a solider by taking in the flesh and blood of the former #1, Teresa.

So as far as the Organization is concerned, at least, what skill she does have in Perception is attributed to Teresa. Teresa was ranked as S in perception, with the special skill of Preemptive Sensing. 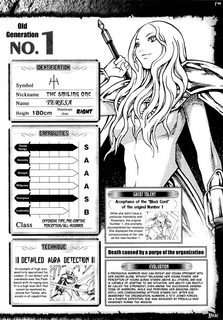 Clare, however, was deeply shaped by Teresa's death at the hands of the awakened Priscilla. She became a Claymore for the singular purpose of revenge. Starting in Chapter 25 Clare joins the Paburo hunt. This turns out to pit them against a (male) awakened being, who makes short work of everyone but the team leader Miria. The other members get a clue to Clare's sensing ability when she provides quick and accurate insights into the extent of Miria's ability. When Miria is exhausted and overwhelmed, Clare gets back up. 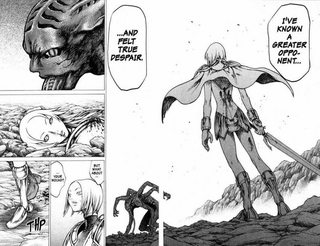 The awakened being is completely unable to land a hit on her, and it's then that we learn that this is far more than the weakest warrior's inheritance. This is a skill honed for that one, singular purpose. 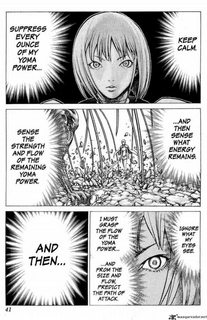 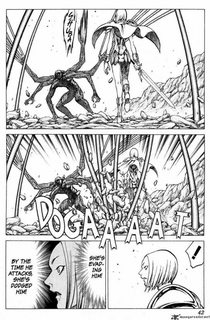 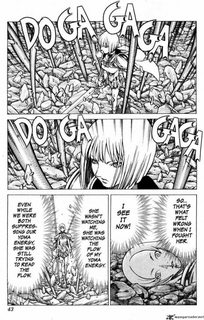 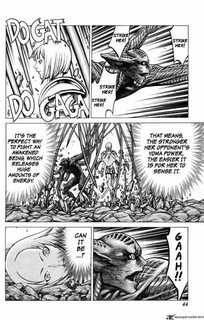 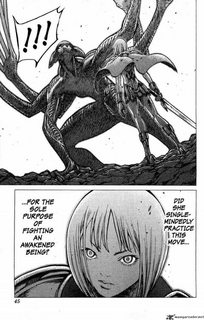 6
Whose and When did Clare felt the aura of yoma as strong and ominious as of Riful for the first time?