Whose and When did Clare felt the aura of yoma as strong and ominious as of Riful for the first time?

In Claymore manga, chapter 45, The Witch's Maw, Part 5(21), Clare says that she has felt aura of yoma as strong and ominious as of Riful only one time before in her life. 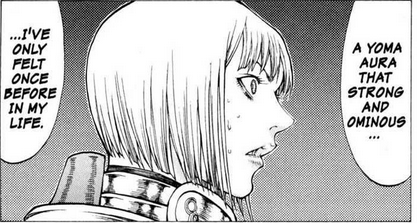 But I don't remember her where she might have felt that aura. Among the awakened she met on her life which were shown in manga, Priscilla is the only one which have aura that powerful. But at that time, Clare was still human so she can't feel the aura.

As there are 3 case where she met the awakened(IIRC). One is the male awakened, second one is when she meets no 4 Ophelia, which was killed by Ophelia by herself and last one is the awakened Ophelia. Among three, I don't think anyone has as powerful aura as Riful.

Another option is, Clare is not talking about awakened but about the Claymore from number 1-5. As number 3 Galatea was with Clare in this fight, so she is out of the list. It can't be Number 1 Alicia and Number 2 Beth because they appear very late in manga. As remaining is number 5 Rafael, she does have enormous aura but they have never met each other. And she did felt something while walking away from Irene but not sure that was aura of Rafael or vanishing aura of Irene.

I tried out to find the time and the person but didn't find anything.

When did Clare felt the aura of yoma as strong and ominious as of Riful for the first time? Whose aura was that?

While it's true that normal human can't sense youki aura, those with sharp sixth sense can, So it's not that human can't feel their aura, but it's just hard to do. From Claymore 86, The Touch's Sin. 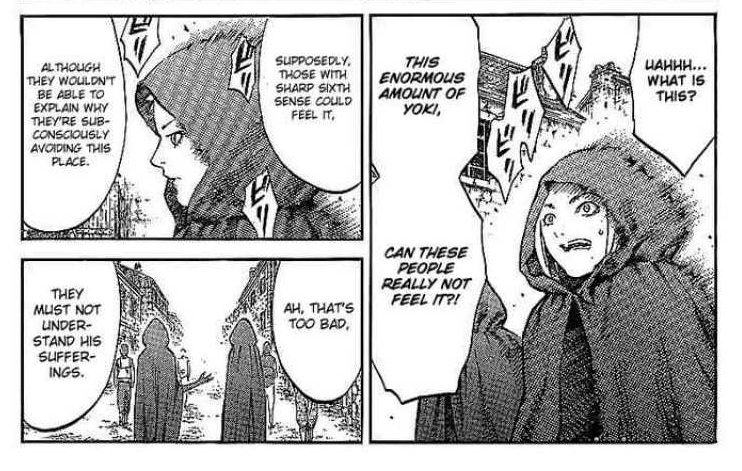 And it's true that you said she met 3 Awakened Beings but none of them were on Abyssal One caliber. Now, you mentioned that Clare might not be talking about the awakened being rather one of Claymore warrior, while this is probably true but considering what Galatea said right after that, they must be talking about the enemy rather than their fellow warrior. 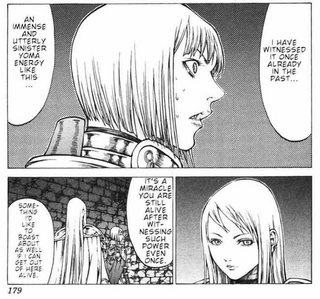 Now this left us with only one possible choice, Priscilla. But did Clare really feel her aura? We don't know for sure about that. However, she saw Priscilla killing Teresa, and when she faced her at close distance, she was overcame by fear, trembled by her presence. From Claymore 24, Marked For Death 7 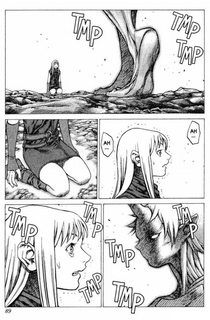 Now that Clare can feel their yoma, she must have remembered that feeling and realize how strong Priscilla's aura actually was.

That would be when she was with Teressa of the saint smile and came face to face with freshly awakened Priscilla.

9
Isn't Flora's ability inefficient?
8
Do Claymore manga and anime have different endings?
6
Can female Claymores give birth to babies for their husbands?
3
How is that possible for Priscilla to kill Teresa?
4
Is Clare able to detect Yoma aura due to Teresa's flesh and blood being the base of her power, or because she honed this ability to a cutting edge?