Why didn't Uchiha Itachi get himself the Eternal Mangekyo Sharingan?

There could be a couple reasons: Two plausible ones were mentioned by Makoto. As we all know, the Sharingan is a pair Dojutsu and so one would need 2 Mangekyou together in order to awaken the Eternal Mangekyou in both of their eyes. The other reason was also stated by Makoto, is because it has been mentioned that the 2 individuals must be related by blood and it makes sense since the only 2 people who have actually ever done this were Sasuke and Madara and they used the Mangekyou's of their siblings.

As for the reason why he did not use his father's Mangekyou, it could be because Itachi knew that he was dying and saw no point in achieving Eternal Mangekyou, just to die to an incurable sickness. He probably knew he wouldn't have enough time to reap the benefits of the Eternal Mangekyou. For more info on his sickness check out this thread; was it ever stated if Itachi was already dying?

The last reason is what I would call "an overwhelming level of Love mixed in with a strong guilty conscience". Itachi wiped out his entire clan to protect Konoha from the coup that the Uchiha were planning, but couldn't kill his brother because he loved him more than everything else. Itachi most definitely knew how terrible his acts were and right from that moment planned to make amends for it by dying at the hands of his kid brother, who would try to avenge the entire clan. Itachi most likely also concluded that Sasuke would have had no chance against him if he had the Eternal Mangekyou, and therefore decided to really fight his younger brother later on after his eyes had deteriorated in such a manner that they would be close in strength and not a one sided battle. 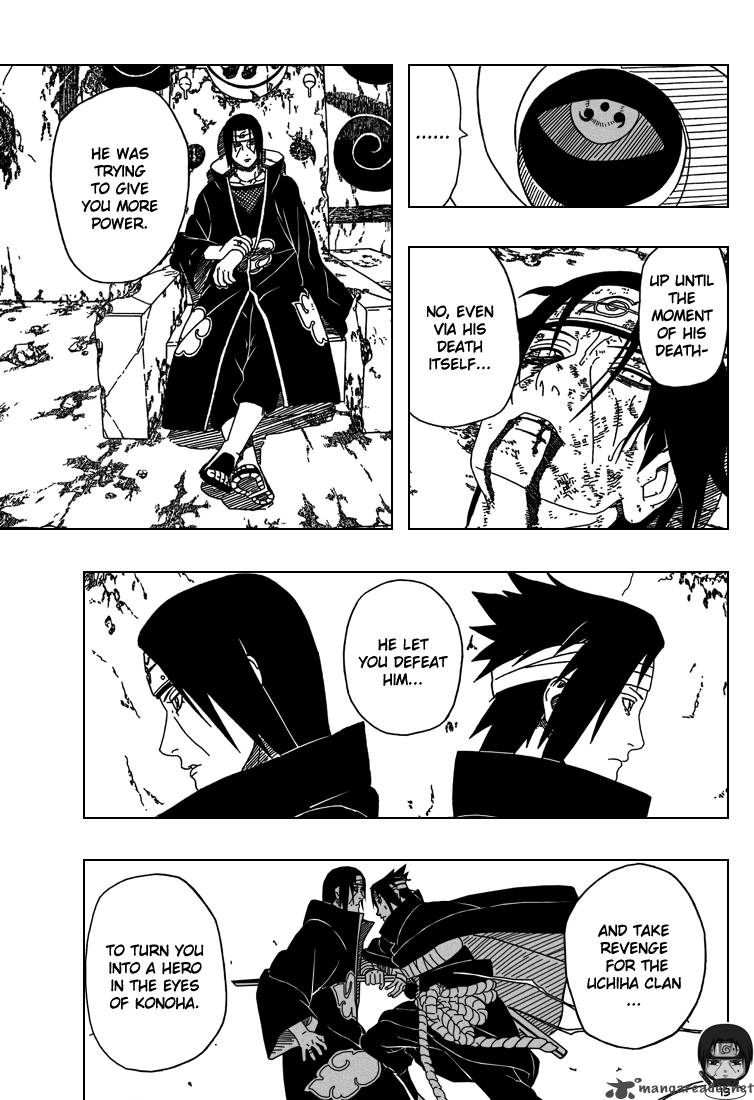 So it was actually because of Sasuke! He knew he was dying and preferred to die at his brothers hand. By doing that, he used his death to make Sasuke stronger. In order to make the fight a bit fair, Itachi decided to let Sasuke have the upper hand (by fighting him while he was partially blind and sick).

Danzo had stolen one of his eyes before Shisui could have given it to Itachi. An Eternal Mangekyo Sharingan has never been created with just one eye; it has always been pairs of eyes.

Also, one other condition for the Eternal Mangekyo Sharingan is that there has to be very strong blood ties between two people. Itachi and Shisui are both cousins at best, so the blood tie is weaker than between Itachi and Sasuke, for instance. It would be unlikely that an Eternal Mangekyo would have formed from Shisui's single eye.

Eternal Mangekyou only requires spare eyes. However, to obtain the Mangekyou you need to be attached to someone, like a sibling/close friend (this explains why Obito never lost his vision and why Kakashi was able to use the perfect sussano).

Itachi didn't get the eternal mangekyou because he just didn't want to. He did not want to take his father's/anyone else's eyes, because maybe he felt very guilty.

The existing answers are incorrect. You cannot get an Eternal Mangekyo Sharingan just by changing to any other pair of eyes, you can only do so if those eyes are from a brother (blood related). This was precisely explained.

6
Was it ever stated canonically that Itachi was already dying when he fought Sasuke?
5
Why did Itachi say that he needs to get someone's MS to get EMS while Sasuke only had a normal Sharingan?

14
How does the Mangekyo Sharingan blind its wielder, and why are some wielders not blinded?
4
How does transplanting different sets of Sharingan eyes work?
2
Did Itachi know that Shisui had a Mangekyo Sharingan?
2
Why doesn't the Byakugan have a second stage?
11
Why did Kakashi's Sharingan fade after Obito died?
5
Can the Eternal Mangekyō Sharingan be obtained by implanting a normal Sharingan?
10
Why didn't Itachi tell Hiruzen (the 3rd Hokage) that Danzo attacked Shisui?
5
Why did Itachi say that he needs to get someone's MS to get EMS while Sasuke only had a normal Sharingan?
0
Why does the Naruto wikia state there are 18 wielders of the Mangekyo Sharingan, if Itachi told Sasuke he could be the third?