What did Griffith mean when he said "you are mine" to Guts?

Mind to help me with this curiosity? Griffith acts differently after Guts decides to leave. He says, "you are mine" to him.

Was this to imply that he was gay for Guts? Ever since they have first met, it confuses me.

You have to remember how Guts first joined the Band of the Hawk. Guts challenged Griffin to a duel, and Guts agreed to join the band as his subordinate if he lost. 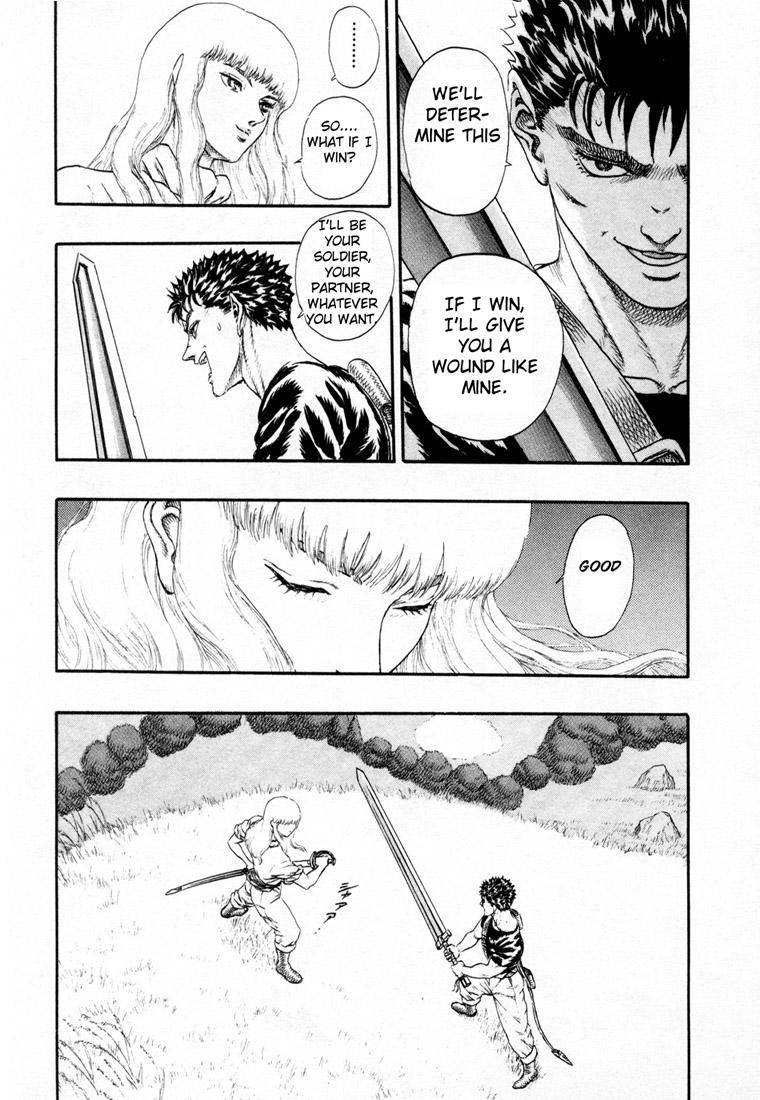 Before this Griffin even told Guts: "I want you", which Guts misinterprets as a gay thing, and Griffin explains how he views him as a military asset with an interesting willingness to risk his life.

This is the sense in which Guts is "his". His membership is guaranteed by the conditions of the duel, and Guts has not won a release from this obligation. This is why Guts and Griffith then fight again when Guts decides to leave.

A lot could be said and debated about whether or not Griffith has sexual or romantic feelings for Guts. It's not implausible, but you have to keep in mind that Griffin is consistently portrayed as a narcissistic sociopath. Sex, sexuality, and personal attachments in general are just tools to him. Part of his frustration and eventual breakdown over Guts's leaving is because Griffin views it as proof that he's allowed himself to grow weaker and soft. He does realize that somehow Guts became more important than his lifelong dream; a dream he had been willing to sacrifice anything for, and had thought this included Guts and the rest of the Band. But he doesn't seem to experience this as "love for Guts" but rather "disgust with himself", as befits his narcissism.

"You are mine" means exactly that, it does not have entail any romantic feelings. It is the same when Griffith admits that only Guts was able to make him forget his dream, it can be because of their strong friendship.

There are very few hints that may suggest he likes Guts that way and all of them can have a different interpretation (i.e the reason he was thinking about Guts while having sex with Princess Charlotte might very well be because he had lost a good friend or simply because the princess reminds him of Guts).

I've always interpreted it as both romantic and possessive. Considering Griffith never said (I want you / you're mine now) to anyone else before or since, it's hard to take it any other way. Imagine if all army recruitment posters were like that. We know he's pretty eloquent, if he wanted to be clear that his words weren't vaguely sexual he'd have said it differently. And Guts completely agrees to all terms even when it means he might be Griffith's plaything.

5
In the Berserk manga, what was the interpretation when Guts was lying on his back looking at the starry heaven?
0
What does Guts have in his left arm and when did he get it?