What is Mugen chewing? 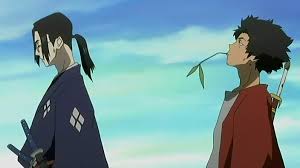 What is Mugen chewing always sometimes he chews small sticks, some other times he chews long stems with leaves. Is that Japanese style? and what is that plant name?

Anime characters chewing on a blade of grass/toothpick is considered a trope in anime and is usually attributed to the delinquent types.

Sometimes a character will suck or chew on something as a form of characterization. These range from toothpicks and blades of straw or grass to lollipops and cigarettes.

In anime, having a piece of straw in one's mouth is a common depiction of a banchou, or juvenile delinquent gang-leader character.

Some other characters that have been noted to conform to this trope: 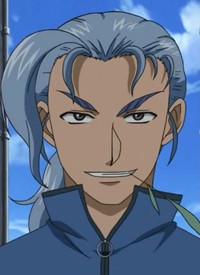 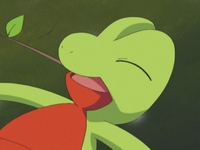 Wikia, on Mugen: Rude, lewd, vulgar, conceited, temperamental, and unhinged - Mugen is something of an antihero.

Thus, it can be inferred that the "blade of grass in mouth" trope is a type of characterization that mostly represents a serious/delinquent sort of character.

The plant isn't usually of significance and isn't the same in every case unless explicitly stated. In a Japanese page that describes Ikki Takeda from the second image above, the following is written with respect to the blade of grass.

which translates to "Always with a leaf in his mouth...", indicating that he's not chewing on any special plant.

As for what Mugen is chewing in the particular image posted, I'd guess it's bamboo.

Not the answer you're looking for? Browse other questions tagged samurai-champloo or ask your own question.

9
What is the mon in Jin's kimono?
5
What settings/characters/events portrayed in Samurai Champloo are based in real events?