How big would the One Piece planet/universe be if looked from outer space?

Since I don't read the manga and I can't remember a lot of it, maybe someone who has more extensive knowledge/understanding of One Piece world can have a rough estimate of how big the universe/planet/ocean is, I'm just curious because all that sea and island being wide apart and we haven't even got to half (or quarter) of it (I guess?).

Would the One Piece planet look similar to earth's size? Or is it more comparable to Jupiter, for example?

The One Piece planet is similar to Earth not only in its Earth-inspired character names. In Chapter 115, Vivi mentions the "Age of Dinosaurs" on Little Garden and Kuzan (Aokiji) has a move called Ice Age, suggesting that there was an Ice Age on this planet. With the exception of the Grand Line, most of the planet experiences four seasons, regular tides, and weather patterns similar to Earth. All of this in addition to regular days and nights suggest that the One Piece galaxy is heliocentric.

However, the One Piece planet has 6 moons, and one of these moons has its own moon (which is large enough itself to be a self-gravitating sphere). Assuming the Ohara citizens were correct about their model of the planet and that the One Piece universe has the same laws of physics as ours, their planet is probably not Earth. Theoretically, it should be much larger but considering imaginary logic, maybe we should just leave the physics up to our imaginations.

I would put the One Piece planet at a similar size to Earth's for several reasons:

I stopped last year reading the manga in the Big Mom flashback, so I don't know if it has been answered in the manga or not, but, in Robin flashback in chapter 392 (episode 275), there's a planetarium of One Piece planet with the moons.

There are 5 orbits, with 6 or more satellites. There might be another moon(s) behind the planet, so from that, we can say that One Piece planet might be very big than planet Earth. It might be like Saturn or even Jupiter size.

We can also see the Grand Line coming from almost the top to the bottom of the planet and the rest are just islands. Unlike our planet, there are big lands which are the continents, but in One Piece planet, the only big land is the Red Line.

Here's a picture of that planetarium: 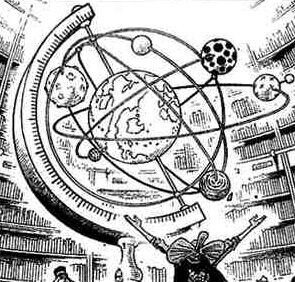 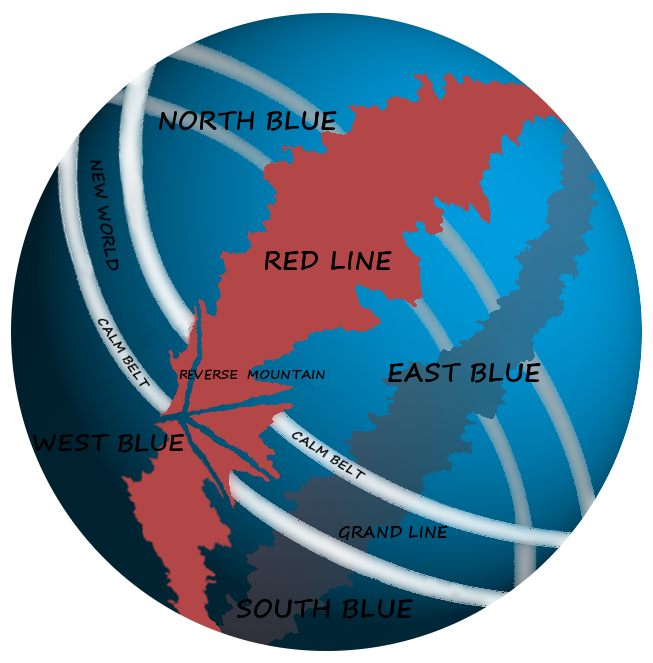 Lol guys i would like to point out that most of one piece (straw hats adventures) where on the little part that is named grandline, so don't forget about the four seas they may have bigger islands look at their size (east blue, west blue , south blue, north blue)

So can you take it as consider.

Add another fact (Kuma can repel things at speed of light, this is a fact in one piece) and imagine that with that speed it tooks Luffy 3 days and nights to reach Amazon Lily while in a repel bubble that travels at speed of light !!!!!

I say this Four seas are not explored properly so don't base one piece on Grandline that is hardly a tiny light of one piece about 10% of the entire world and it got about thousands of islands (grandline alone) not to mentions the ones in the four seas.

As mirroroftruth mentioned, One Piece is based on real life: most characters are based on real historical people and many places as well. For example:

However, it seems to me that islands are not very big so I wouldn't say the One Piece world is as big as the Earth...

8
How does the travel works in One Piece universe?
4
Where is All Blue located?

15
How popular is One Piece in Japan?
9
How much has changed since the start of One Piece?
2
How does navigation work in One Piece universe?
3
How is the rarity of Devil Fruits determined in One Piece?
10
What are the similarities between Gol D. Roger and Monkey D. Luffy? Are they related by blood? What are their relatives' ages?
3
Law's goal with the One-Piece?
5
How does the One piece Bounty system work?