I've posted an image of an anime girl below. Do you have any idea about who she is and where she is from? I think she seems to be from a visual novel according to CG. 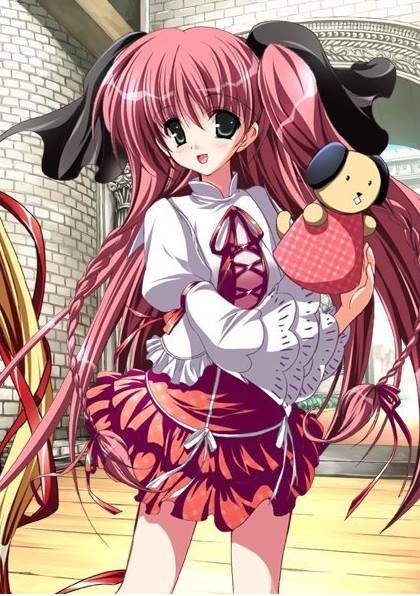 The other answer is almost correct. The name of the VN is 楽園の令嬢（アリス）たち, but the parenthetical word after 令嬢 (normally meaning daughter or young woman) is means that word should be read as Alice (アリス) in this case. So the name of the game is, in romaji, Rakuen no Arisu-tachi. The character's name is indeed Inujima Rise (狗島離世). The game is by doujin group Harthnir, and version 0.01d was released in 2006.

It's not clear to me whether a full version of this game was ever released. There was definitely a trial version, which the f-game page above mentions. All references I can find are for the trial version. The website for the game is also down. All the references I can find to the game are to ver0.01d or earlier, which was definitely released, but is not a full version (as far as I can tell). There were some rumors that the full game would be released in 2009, but very little new information has appeared since suggesting that this didn't happen. Assuming the game wasn't released, I'd probably conclude that it was abandoned.

This is a character from the adult eroge, Rakuen no Reijou. The character's name is Rise Inujima.

Not the answer you're looking for? Browse other questions tagged rakuen-no-arisu-tachi .