Has Yugi (or Yami) ever lost a duel fair and square?

In either the anime or the manga, has Yugi (or Yami) ever lost a duel fair and square? By "fair and square" I mean that Yugi wasn't:

And no, Yami losing the Final Battle (a.k.a. Ceremonial Duel) doesn't count since the two people were split and one of them had to lose.

I would prefer duels that weren't Shadow Games, since the pressure of that can arguably detract from the game being fair, but won't discount that completely.

As Memor-X mentioned, in the Waking the Dragons Arc, Yami duelled against Rafael and lost. Yami was compelled to use the Seal of Orichalcos that Rafael had given him earlier in the duel because he felt like there was no other way to win (though the power definitely went to his head afterwards!). The episode is a three-parter, but Yami/Yugi loses in Episode 158 - Fate of the Pharaoh - Part 3.

If you don't want to include the Ceremonial Duel, I believe that's the whole list. All other duels where Yugi/Yami lost, he either surrendered, deliberately misplayed (I include Yami duelling against a spirit of Yugi in Waking the Dragons in that) or was against a cheater.

Yugi does lose a duel in the manga and Toei anime, but not in Duel Monsters

In chapters 46 and 47 of the manga, and episode 18 of the Toei anime, Yugi plays a game of Dragon Cards (called Dragon Block in the anime) against Imori, a student from his school (this was back when the series used a different game nearly every chapter, before it changed to focus exclusively on Duel Monsters).

Imori stole Yugi's Millennium Puzzle in the hopes of harnessing its power for himself. He broke the seal on the Dragon Cards jar, which triggered a Shadow Game in which the loser's soul would be trapped in the jar. Without access to Dark Yugi, Yugi couldn't formulate a winning strategy and he loses fair and square, getting his soul sucked into the jar. 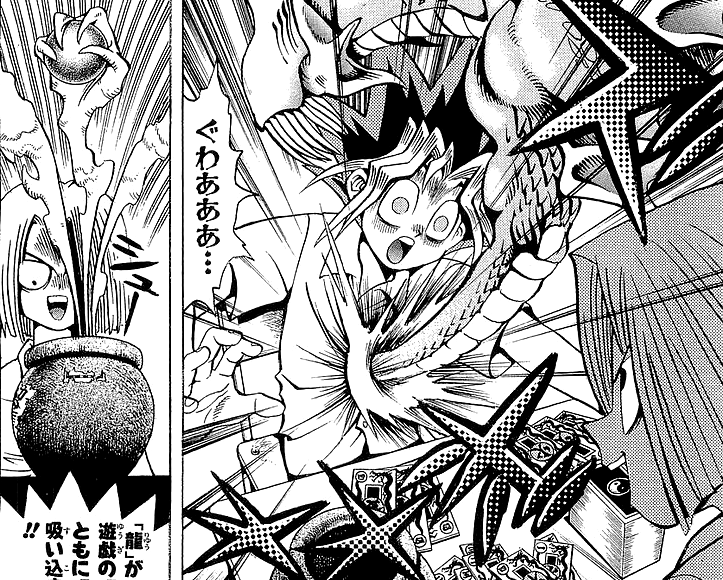 The jar can only hold one soul, so Yugi's is released, and Imori's soul is captured within it. In the manga, his body remains lifeless and his soul is slowly digested by the spirits of the 25 dragons in the game. In the anime, a new, gentle soul is born within Imori and he awakens (Dark Yugi notes that Dragon Block took his haughty soul). Imori asks Yugi to seal away the game again so that it won't harm anyone.

Yugi/Atem/Yami technically did lose fairly to Marik Ishtar/Dark Marik in the final duel of the Battle City tournament. Atem did not win this duel, Yami Marik won this duel, Odion saved Atem from suffering.

Most people think Marik was a weak duelist, yet ignore the fact that he was praised by Kaiba, Atem, and managed to defeat the main villain of the show (Bakura). He adapted to the new rules of the game in Battle City really easily. Atem/Yugi would not have been able to draw a card and clearly lost the duel, all Marik had to do was end his turn then Atem would have decked out and lost. Marik is the only canon loss that Atem suffered: Duel Monsters, episode 142

There are three more times where he lost a duel fairly, but the problem with those incidents is that they are filler and thus not considered canon.

Atem was a lucky duelist who rarely won due to skill.

The manga and the anime are quite different indeed. The anime duels never played the same as either the manga duels or the OCG/TCG which came afterwards. Yugi (Atem/Yugi) is much more skilled in the manga.

Only in the anime in the last episode, it was shoehorned-in last minute the magical handwave to explain how he pulled the card he needed in the anime.

The anime added a whole metric ton of cards to his deck that never existed in the comic, because Konami was trying to sell trading cards, which resulted in his deck appearing to be a 300-card pile of crap that didn't have a single strategy.

In the comic, Yugi's deck DID actually have a control-based strategy. Largely focused on spellcasters, fiends, and warriors, his duels were much more consistent and thought out, and he often won through knowledge of the rules, forethought, and clever plays. He never "cheated" in any of his duels. If he got the card he needed, it was luck. The game, no matter what the version, is 50% skill/50% luck.

In other words, Manga Yugi didn't need the plot armor: "The Superpower!" because he had a solid deck recipe and strategy.

So, the whole "destiny draw" thing was never mentioned in the comic, never shown in the comic, and no-one, especially Ishizu, never even theorized on it in the comic, because it never existed.

You could make an argument for Anime Atem because of his destiny draw that he's not really skilled and it's just plot armor. But anime duels were always played with a skill/deck draw power combo. It's literally explained in the anime that if you have a close relationship with you deck, you will draw the cards you need more often, even going as far as knowing that your deck will supply you with the card you need at a specific time.

Yugi/atem has a close relationship with his dark magician, kuriboh and dark magician girl; they help him by making him draw the cards he needs.

This is called "believing in the heart of the cards" and is the most important plot point of the first anime series. Not just that, it's a skill as well. One that can be trained/learnt. In GX for one episode, a guy actually trained in the mountains to be able to draw any card he wanted. In GX, another guy had to sell his soul to the grim reaper to slash-draw.

Dark Yugi has lost three duels in the manga, and five in the anime along with Yugi. Yugi by himself has lost two additional games in the manga. Yugi (Dark Yugi/Yugi) is the type of protagonist that wins a lot so when he loses, regardless of circumstance, it serves as a character development moment. Except his losses actually do this, unlike the sequel series.

Not the answer you're looking for? Browse other questions tagged yu-gi-oh .

7
Did Yugi duel against a prerecorded Pegasus or the real one?
8
Why has nobody been able to summon Exodia before Yugi?
2
Has there ever been a duel, where Yugi used every existing card right?
2
How Yami Bakura could summon "The Winged Dragon of Ra" without be in "sphere mode" and neither pronouncing the chanting?