What is the power of the seventh Witch?

What exactly is her power?

Why did Miyamura's sister, Yamada, and the president not get affected by her memory erase?

I understand that perhaps she couldn't erase Yamada's memories, but then how did the other evade the memory erase?

The 7th witches power is the the power to forget everything about the witches.

Miyamura's Sister ran away from her and escaped so was not affected. She's hasn't returned to the school since.

Yamada's power reversed the power and everyone else forgot about him and the witches.

The president was not affected because the student council president is the only student who may be immune to the witches' powers.

There's some fan speculation that the presidents are people who have Yamada's power, or have had. 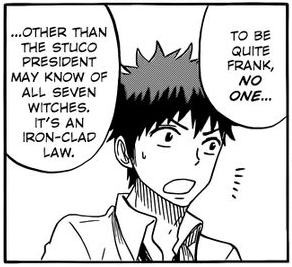 The 7th witch's power is memory manipulation. She/he also has the power to see the witches out of the students in the school. This power was revealed on the second witch war arc when Yamada became the seventh witch.

Not the answer you're looking for? Browse other questions tagged yamada-and-the-7-witches .

4
How much different are the live action and manga versions of "Yamada-kun to 7-nin no Majo"?
3
Why did Haruma Yamazaki become the student council president?