Why does Gogeta SSJ4 have red hair?

Both Goku SSJ4 and Vegeta SSJ4 have black hair before they fuse. However, Gogeta SSJ4 have red hair then. When other fusions happen, the merged warrior has the combined hair of the individual warriors (Gotenks, Vegito) 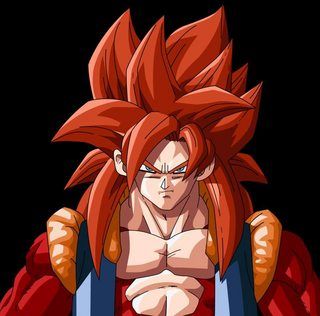 Why does Gogeta SSJ4 have red hair then?

There isn't a definite answer for this and considering the fact that Dragon Ball GT isn't canon, we aren't going to get any definite reason as to why this is the case.

All the pure saiyans are black haired, so Gogeta SSJ4 have to be black haired too. He appeared for the first time in the 60th episode of Dragon Ball GT. This Dragon Ball series isn't part of the original main story.

So, it's probably a mistake due to the studio who produced this episode and does not respect the rules instantiated by Akira Toriyama in Dragon Ball Z because mistakes are commons in Dragon Ball series (Vegeta scooter's red-haired too, Vegeta's mustache, blue-haired Broly, ...)

Not the answer you're looking for? Browse other questions tagged dragon-ball-series dragon-ball-gt .

3
Why is Trunks not as powerful as Gohan when they are both human-Saiyan hybrids?
2
How does Gohan inherit his "Mystic" power while others do not?
3
DBGT: Does Goku die of old age when he turns SSJ4 in the future?
2
Can the same potara earrings be used to fuse other warriors after a fused warrior defused?
0
Is Dragon Ball Heroes Goku Ultra Instinct way stronger than Dragon Ball Super Goku Ultra Instinct?
2
Do Gogeta and Vegito have the same personality?