Is is possible that a shooting range is the whole court? [closed]

In Kuroko no Basket's Episode 12 , Midorima said that his shooting range was the entire court. Can this happen in real life? 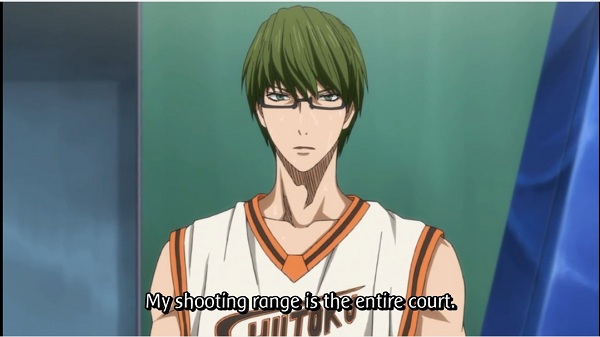 His shooting range isn't the entire court. I haven't watched the anime, but I have read the latest manga and his consistent shooting range is around half court. His statement is probably a bluff in this case.

No one can frequently hit shots from full or half court in basketball, it is simply too far. Most people throw the ball from those distances, because shooting doesn't have enough power to go that far. And throwing the ball means you are just lunging it, without aiming.

If you can hit a shot from full court range, you dont even have to pass in the ball. You can just throw it from there.

4
In Kuroko no Basuke, are the characters ever compared to professional players?
4
How did Kuroko's vanishing drive affect Momoi?
2
Did Midorima forget to bring his lucky charm in the Winter Preliminaries?
3
Why is Taiga afraid of dogs?
1
Does the “running technique” of Seiho players exist in real life?
4
Why does Midorima's nails influence his shots?
6
Did Kiyoshi have an injured knee even before being seriously injured by Kirisaki Daīchi High?
3
What are the differences between the two personalities of Seijūrō Akashi?
6
Why weren't Kise and Midorima able to get in the Zone?