In the Episode 391 of Shippuden, Reanimated Madara gets his own real body by forcing Obito via Black Zetsu to use the Rinne Rebirth Jutsu.

Similar to Nagato at the end of Pain arc fight, Why didn't Obito die since he used the same Jutsu as Nagato.

The wiki clearly states in exchange of own life, the Jutsu is performed.

Can anyone explain this?

In Chapter 657, right after Madara is brought back to life using the Rinne Rebirth jutsu, the scene moves to the Kamui dimension, where Zetsu confronts Kakashi, Minato, and a fatigued Obito.

Zetsu explicitly stated that Obito will die from using the jutsu. And then, 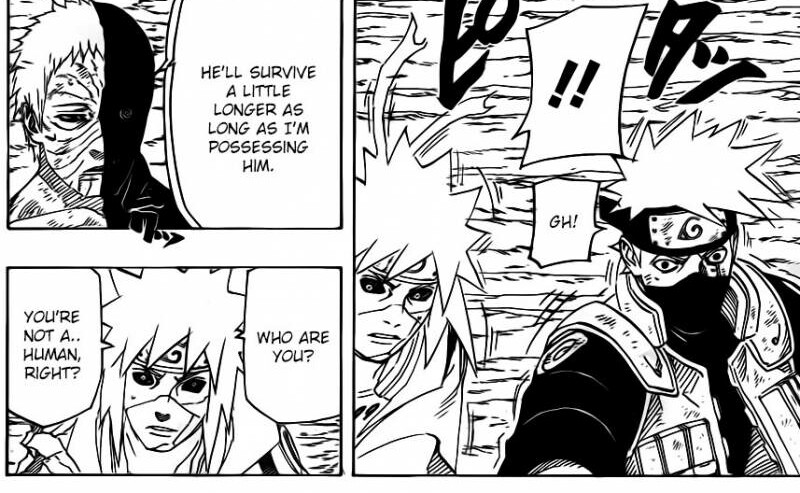 So Black Zetsu was the reason Obito was able to postpone his unavoidable death.

You don't die after using the Rinnegan Rebirth-if you remember correctly, Pain used the Rinnegan Rebirth too. Konan said that it would exhaust and possibly, kill him. So basically the art of Rinnegan Rebirth is not a new life in exchange for another one-its a justu which takes an enormous amount of chakra. You could die because of the exhaustion though. An example of this is that Nagato revived a whole freaking village while Obito just revived Madara Uchiha. Which should see a difference in terms of chakra

The reason Obito didn't die is because Black zetsu was saving him from dying them later he becomes ten tails jinjuriki which if we stayed in that form longer he would have been immortal then after ten tails was extracted he still had little chakra from each tailed beast. The reason he didn't die was because of Black Zetsu and especially ten tails. You see to perform rinne-rebirth you need especially high chakra which uchiha don't have ( I mean Uchiha have lots of chakra but not enough) so if an Uchiha more specifically Obito did it he would have died. Nagato ( Pain) is an Uzumaki and Uzumaki have lots of chakra. The reason Nagato died is because he had wasted lots of chakra in his battle vs Naruto and he also did the very powerful all mighty push which in my opinion drained maybe half of his chakra.So somebody like Obito,Sasuke,and Madara will die if they use rinne rebirth. The only people who would survive would be an Uzumaki, Nagato, and Naruto. Naruto would survive because he already has lots of chakra by being an Uzumaki then you add the Kurama he would have lots of chakra so he wouldn't die. Also in my opinion Naruto would be best suited for Rinnegan because he has 9 tails + Uzumaki chakra and rinnegan drains lots of chakra so it would be a best fit. Even Sasuke with his a lot of chakra will be drained if using a time space rinnegan jutsu so in my opinion the rinnegan would be very powerful in Naruto´s hands. Also the rinnegan that Nagato has was transplanted from Madara´s to Nagato because they choose him because he had lots of chakra.

6
Why did reanimated Itachi lose eye vision after using Izanami?
3
Who was Obito going to revive?
11
Why did Kakashi's Sharingan fade after Obito died?
2
Why didn't Kamui kill obito?
4
If the Edo-Tensei had unlimited chakra could they use rinne rebirth to revieve themselves?
2
Can users of Rinne Rebirth exchange other's life to revive someone?
2
Why Raikage didn't consider Minato using Body Flicker in their fight?
1
How was Madara so sure that he would be able to get his Rinnegan back?
0
Why didn't Hashirama, Tobirama and Minato use rinne rebirth?