Did the League of Villains kill Kai Chisaki?

Spoilers (for those who haven't read the manga or reached chapter 160) :

After being defeated by Eri and Midoriya, Chisaki was under police custody. As the police were transporting him to jail, the League of Villains attacked the police cars. The last time we saw Chisaki was when he was still tied up surrounded by the wreckage. During the last time we see him, the League of Villains were taunting him about his failures and even cut his arms off. They also take his quirk drug which he (Chisaki) basically devoted most of his life to making.

After that, we see an explosion, but we don't know if they exploded Chisaki or trapped him in a tiny orb by using Atsuhiro Sako's power to keep him because I noticed earlier Atsuhiro was holding an orb above Chisaki (but after that Chisaki wasn't inside the orb, the League was still talking to him). His current state is unknown and I was wondering if anyone knew the author ever said something about his current state or if I missed something while reading the manga.

While his current state is "unknown", we can assume that the League of Villians did not kill Kai Chisaki.

In Chapter 160 of the VIZ translations, Overhaul himself, asked Tomura if he (Tomura) was going to kill him (Overhaul), to which Tomura replied no, and that he thought up of something 'worse'.

Regarding that orb you mentioned, Atsuhiro was holding it over Overhaul but he did not compress him, he just compressed part of Overhaul's arm, severing it as seen below. 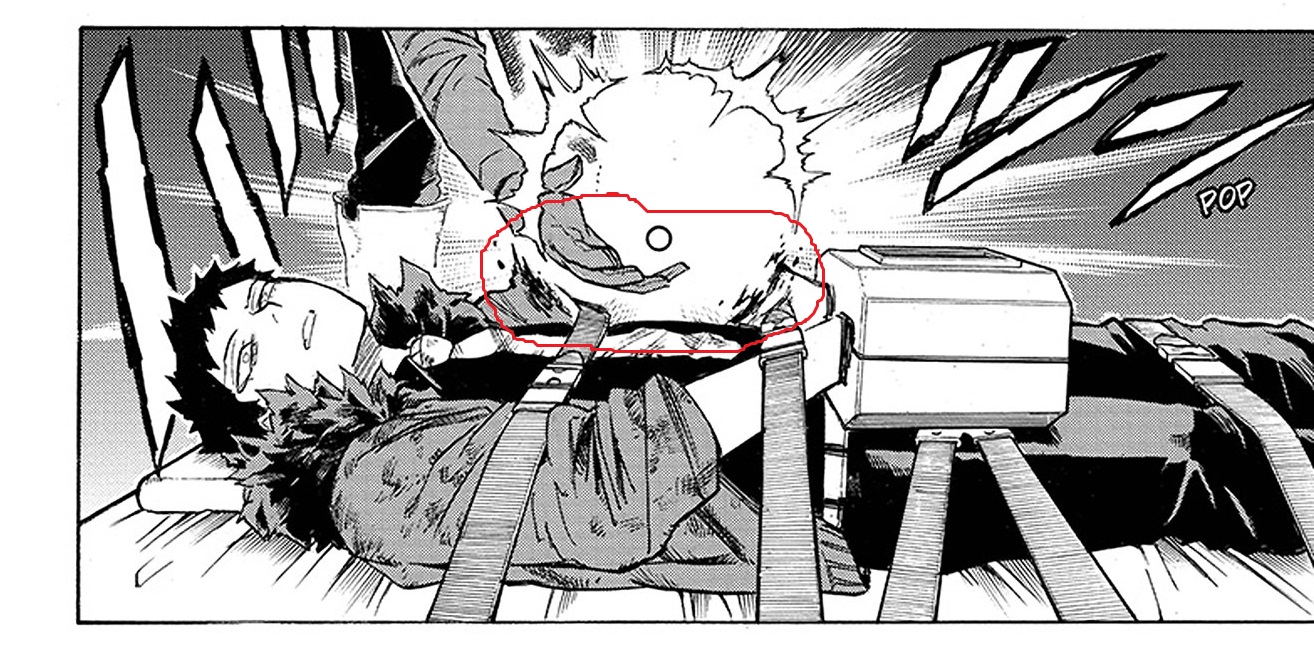 Later on, we see Tomura saying to Overhaul to 'sit back and have a nice life' after severing his other arm, and robbing him of his quirk, which Chisaki relied heavily on. Overhauls expression showed fear at the thought of spending his life with no Quirk, which as the wiki noted, is ironic, since he spent his life eradicating Quirks from people. 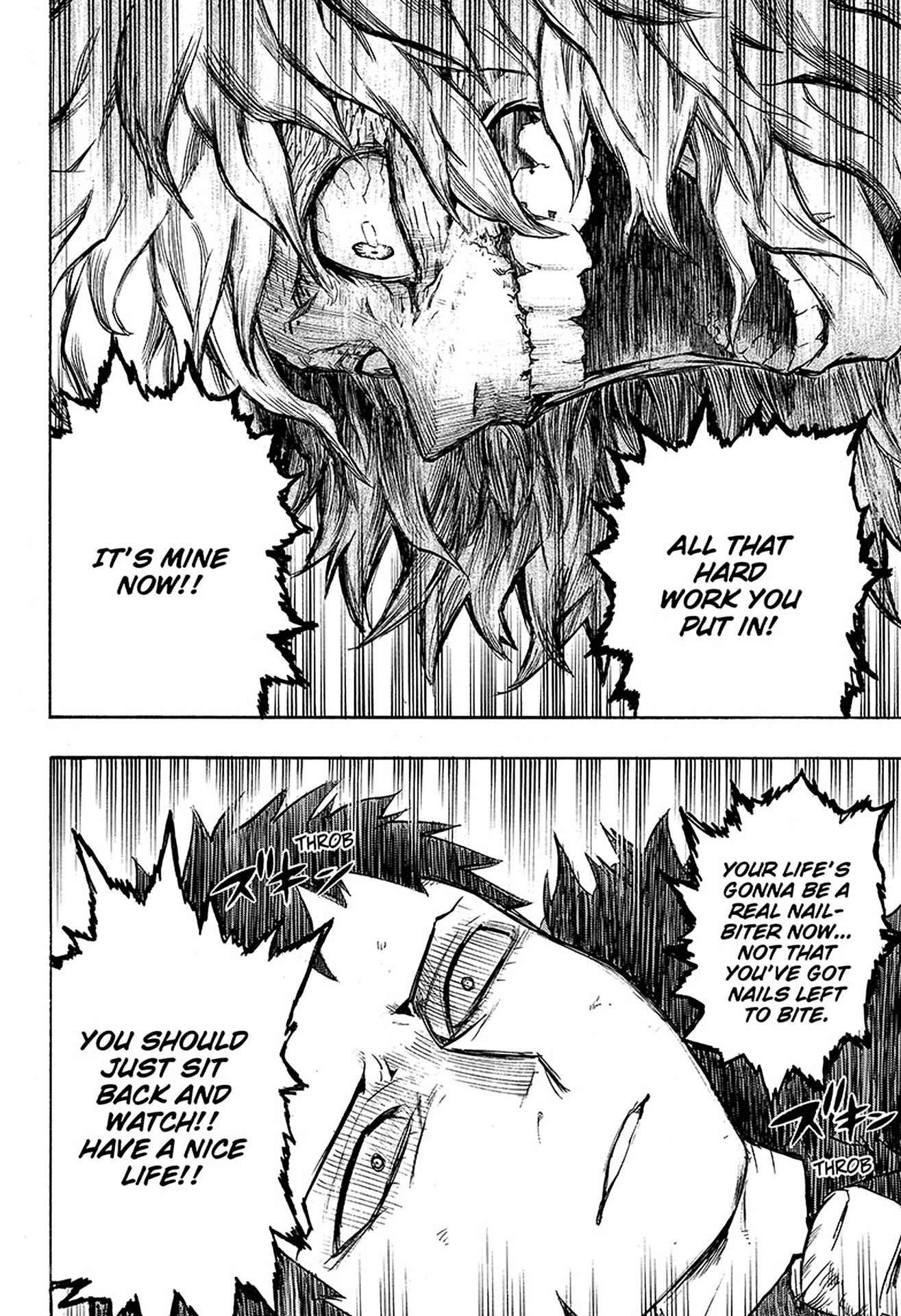 Finally, the first panel of the last page of chapter 160, shows something already burning in the background but on the second panel, we still see Overhaul alive with no hint of him being burned, with the same expression of fear as seen in the previous page. This confirms the fact that Tomura wanted Overhaul to suffer first, in revenge for everything he had done against the League of Villains. 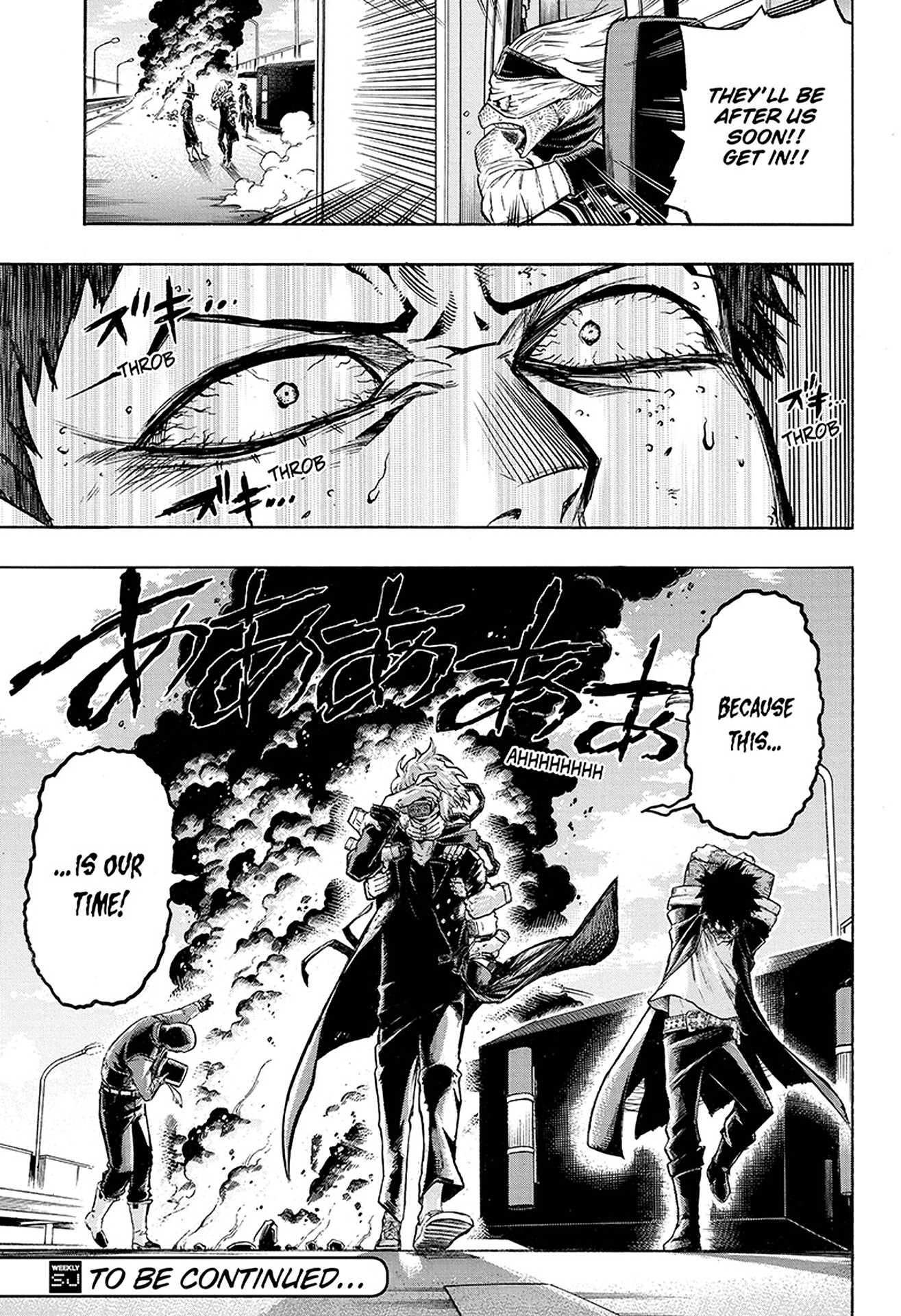 Episode 77 of the anime makes it perfectly clear that Overhaul is still alive.

First of all, the fire seen in the final panel of Chapter 160 is shown to be a considerable distance away from Overhaul, and couldn't possibly have reached him: 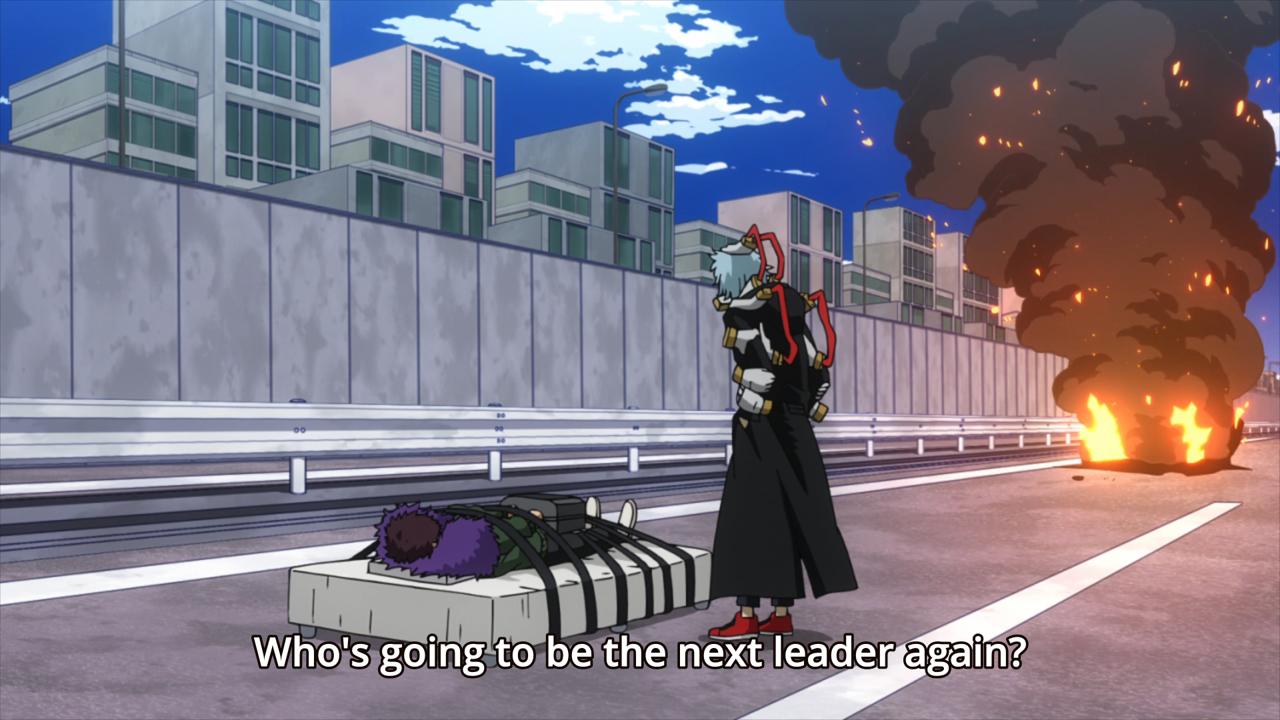 Secondly, as Shigaraki and the League of Villains begin to walk away, Overhaul begins screaming in anguish: 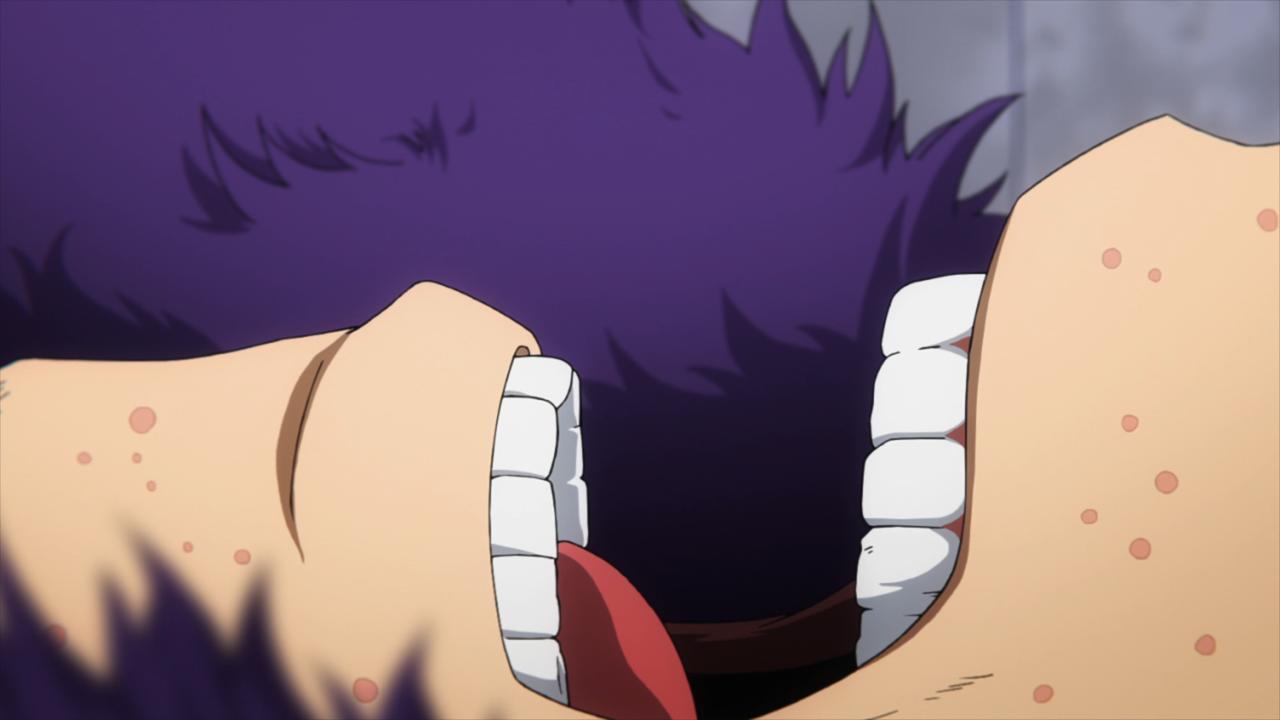 ...and he's still screaming as the scene ends.

As you stated current status of him is unknown. We can assume he is not dead since League of Villains could nuke the convoy and killing everybody. However that wouldn't benefit them like at all. They attacked the convoy because they want them alive. We can assume that they are probably after quirk drug.

In the 18th volume of My Hero Academia, I think it was All Might that mentioned the attack on the ambulance to Midoriya. Midoriya said, Wait... So you mean Chisaki was.... by the League of Villains?

*******SPOILERS******* IF NOT UP TO DATE AT LEAST WITH US ANIME ****** No he not dead after Tomura degraded his arm cut it off he said he was going to leave him alive quirkless to watch for rest of his life from side lines. Eri could fix him if she were to help him not sure if time limit on here rewinding quirk. Not to mention there may already be a cure all for him since earlier he mentioned that not only did they make a permanent quirk stealing drug but also a cure or possibly the quirk increasing drug could allow him fix himself he may gain ability to use feet or even sight to activate it. The 3cm razor guy went from only being able make razor blade to being able shoot sharp steal blades out from even his eyes so all overhaul would need do is gain weight so has extra mass to convert into arms if he can have 2 extras (and they were able to be used just as his hands not limited to just his original body hand touch if merger and has 4 arms then they work.

15
Why does Bakugou drag Kaminari into the bushes and what did he do to him there?
13
Why did Midoriya come last in the quirk assessment test when there were others worse than him?
9
How did Toru and Koji pass the entrance exam in My Hero Academia?
2
A metal song on season 3 episode 3 of Boku no Hero Academia where the villains are starting in the wood
6
What measures does the police take to control villains with all sorts of quirks?
1
Can Kai Chisaki fuse with anyone?
0
Did the hero killer get deku's quirk
2
Why did Deku get all the past OFA Quirks but All Might didn't?