What are the differences between the 2002 and 2006 versions of Kanon?

I only watched Kanon (2006) which is made by Kyoto Animation. What are the differences between the 2002 version and the 2006 version of the series?

The most obvious difference between the two is the artwork. The 2002 version was fairly close to the artwork from the VN. In contrast, the 2006 anime was with KyoAni's own style, which is more similar to their previous anime Air than to the original Kanon artwork. I think most people would say that 2006 has the better animation quality. The soundtracks of the two are understandably also different. In terms of theme songs, the 2006 version used remixed versions the original songs from the VN, while the 2002 version used new songs. The voice actors are the same with the exception of Yuichi and Kuze. 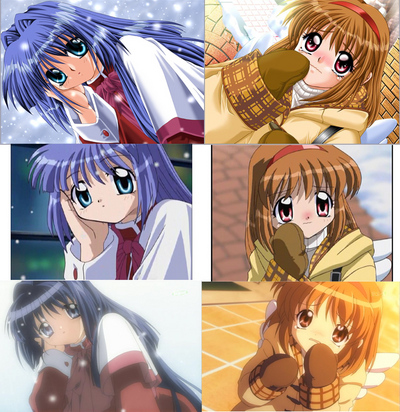 In terms of plot, there are going to be many small differences. The 2006 one had 11 more episodes than the 2002 one, so understandably there is more content there. Both are very close to the VN, but the 2002 one stripped out a lot of extraneous content and condensed a lot of necessary content (to the point that it created some plot holes). The content that was removed had a lot of comedy, so the 2002 version comes off as more of a drama than the 2006 one. The one difference that I definitely noticed is that Mai's story in the 2002 version was greatly condensed to the point of not making sense, while it's quite well-paced and understandable in the 2006 version. Overall, the big differences are that with the 2002 version, you just don't get as much of the story, and it goes somewhat faster.

I think the advice of most people would be that if you've already watched the 2006 version, there's not a lot of reason to watch the 2002 version. Instead, if you want more Kanon, the better thing to do would be to read the VN.

Not the answer you're looking for? Browse other questions tagged kanon .

3
What was Ayu's third wish?