What is the meaning of this 'fox' hand gesture?

In chapter 729 of トモちゃんは女の子 (Tomo-chan wa Onna no Ko), two characters are negotiating, while other two do the hand gestures depicted in the following image: 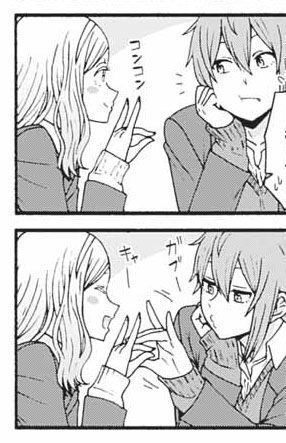 By the Giseigo (Onomatopoeia) used here (コンコン - Kon Kon) I deduce it has to do something with foxes (Foxes being described in Japanese folklore as very intelligent and cunning). I have seen the same gesturing a couple of times before (I don't remember where) in the approximately same situation (a character leading another by the nose).

What is the meaning, then, of said gesturing? A reliable source or reference would be appreciated.

The origin of it's recent popularity is likely linked to the female metal band Baby Metal which popularized it, potentially as a variation (perhaps accidentally) of the Sign of the Horns (Maloik sign in Japanese). Often referred to in Japanese as キツネサイン or Fox sign. Associations to Shinto shrines and fox masks are present in some of their works, so it might have been capitalized later on as part of their brand.

In the given context, there is likely no deeper meaning besides a cute greeting between girls. Perhaps used like the Peace sign. The sign itself probably predates the band. As it's see used in various places including the WWE, as the "Too Sweet Sign".

It probably not like one of those campaign that catch on via social media for promoting a specific purpose.

The gesture itself predates modern pop culture and can be see in Buddhism or Hinduism as mudras called the Apan or Simhamukha, depending on who you ask.

In Japanese sign language, two of those hand symbols touching together at the tips of the fox's "nose" means "kiss" for people or in general. However, in this case they seem to be playing around, like you would with bunny ear gestures, as another comment mentions.

Edit: Here is a video of the "kiss" sign in Japanese sign language. I couldn't link the page but if you search www.spreadthesign.com for "kiss" you can find the dictionary entry and video. The sign was used prevalently in the drama "Orange Days", which featured a hearing-impaired character. Using the sign around that time was kind of a fad for a bit.

Not the answer you're looking for? Browse other questions tagged tropes culture tomo-chan-wa-onna-no-ko or ask your own question.

3
What does Mai's weird hand gesture joke even mean?

25
What is the origin of this facial expression with one's tongue sticking out?
14
What are the Naruto hand seals based on?
1
What is the meaning of the Yellow balls in the second episode of Denki-Gai?
10
What is intended by a spiral on a character's finger and what is the origin of this trope?
2
What does this grinning gesture signify?
1
What is the meaning behind dark works often taking place at midnight?
8
What is that “Oh yeah!” gesture that anime characters do called?
3
Why does Orochimaru's Laboratory have this item to hand?
15
What is this type of hairstyle?