Why is Giorno's clothes color different between the manga and anime version?

On Jul 5, 2018, there was an announcement about Jojo Bizarre Adventure: Golden Wind that will be aired in October 2018.

When I see the first pic of the anime version of Jojo part 5, the color of Giorno's clothes looks like this. 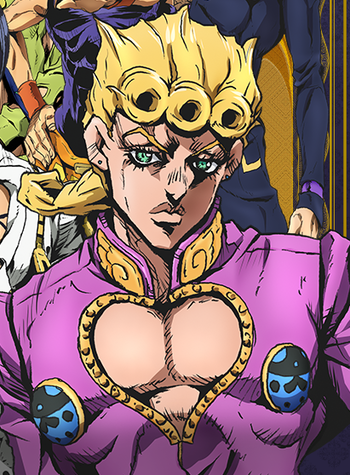 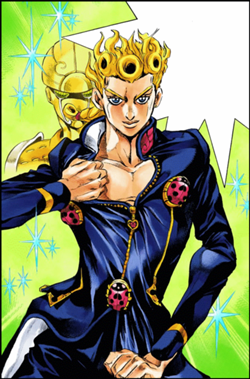 I know that some of Jojo part 5 manga's cover has this color (pink) for his clothes like volume 54 and volume 55 but it's only the cover, like many other Jojo manga's cover that have many colorful clothes, background, lips and so.

Why did they choose pink for Giorno's clothes?

Why not blue?
Because apparently there is no canon color scheme to JoJo's.

Hirohiko Araki stated in notes from his lecture from 2006

When Jojo became an OVA, one of the animators asked Araki "what color if Jotaro?" however Araki had no such concept. He colors everything based on calculation. For example, in Volume 54 Giorno's clothes are pink, but in Volume 63 they are blue.

As praraphrased by Super Eyepatch Wolf, "he doesn't view his world or characters in any consistant color palet".

Why pink?
Dunno. Looks good on him? I'm betting the production staff had some freedom when it came to the color palet given Araki's attitude towards colors.
Also, as stated, the color scheme has been seen in past media such as the covers mentioned.

The production staff may have also wanted to differentiate themselves from previous color choises. The blue was the color of choise for the DIGITAL COLORED COMICS version, which I think the picture in the question originates from, as well as games such as All Star Battle and Eyes of Heaven.

6
Why are Kakyoin and Polnareff so pleased about knowing the same hand signals?
5
What is the connection between Stands and Ripple Energy?
3
Why did the stand "Notorious B.I.G" change to "Notorius Chase" in the anime?
3
Why didn't Giorno heal Polnareff's body and restore his soul to the body?
1
Where and how was Diavolo hiding where he was after the body swaps of Silver Chariot Requiem?
2
How is Giorno able to do this to Diavolo?