What is the triangle-shaped headband these characters wear?

I don't know what to call them, but I've seen these triangle-shaped things sometimes in anime: 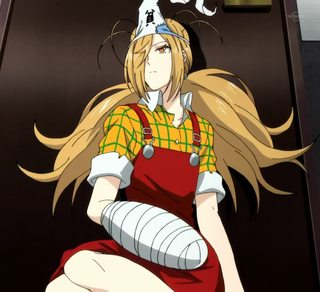 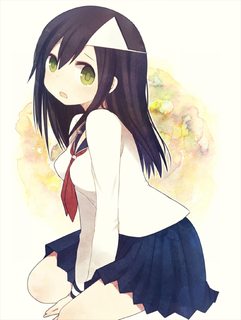 What does the triangle-shaped headband mean and what is it called?

This triangle-shaped headband is called a tenkan (天冠, lit. "heaven crown"). In some parts of Japan, it may also be called a zukin (頭巾, lit. "hood" and also used as a generic term), a hitai-eboshi (額烏帽子, lit. "forehead headpiece"), or a kami-kakushi (髪隠し, lit. "hair-hider")2.

Traditionally, the tenkan was one component of a traditional burial garment (shini-shouzoku / 死に装束). The garment also typically included a white kimono, these glove-things (tekkou / 手甲), and a particular style of boots called kyahan (脚絆) that I'm having trouble finding a good picture of.

There are a number of explanations of the purpose of the tenkan, including:

In anime today, I get the feeling that the tenkan basically serves as a signal to viewers that whoever is wearing it has something to do with death (or, more generally, with non-humanness, I guess).

There is no specific word for it. It's basically a headband, and can be generally referred to as a boshi (hat) or nuno (cloth). It's typically associated with the white burial kimono, called a kyoukatabira.

This triangle-shaped white cloth item can go by multiple names, depending on the region and religion. They have grandiose names such as tenkan/tengan (heaven's crown) mundane is zukin (hood or kerchief). Several of terms are simple and descriptive, like hitai-eboshi (forehead hat), or hitai-kakushi (forehead-hider), kami-kakushi (hair-hider), houkan (diadem, only Buddhists use this word) and kami-kaburi (hair headdress). The most basic term of all is probably sankaku no (shiroi) nuno (triangular [white] cloth).

There have been two popular theories on it's purpose/origin, both are speculative. Some say that the dead have or need to ascended to a higher level, and thus the cloth item is placed upon their heads to show their new status, or to help them ascend. Another theory suggests that that the sharp point of the triangle shape are a ward to deter evil spirits/demons from entering the corpse and resurrecting the it or preventing the soul from passing on.

In anime and manga it has been known to symbolize the dead, including zombies, vampires, and ghosts. When you see this in anime or manga you know that the character isn't alive.

Not the answer you're looking for? Browse other questions tagged tropes blood-lad binbou-gami-ga or ask your own question.

25
What is the origin of this facial expression with one's tongue sticking out?
110
Why are the protagonists generally seated by the window?
28
Why do characters often pull down one eyelid and stick out their tongue?
6
Why are wash pans dropped on a character's head?
2
What are these designs based on?
8
What are the blue downward lines in used to symbolize depression or sadness called?
14
Why do people wearing a headband with two flashlights or candles when acting crazy or out of place?
14
What are those weird three-line blushy things on some anime/manga characters cheeks?
1
What do smaller eyes persons in anime mean?
2
What is the origin of this weird looking facial feature/mask?