How does Star Platinum get the same ability as the World?

We don't usually see "Stands" with the same ability. How does Jotaro develop a power similar to Dio's in the final battle. And now, everytime he uses his stand, he shouts out "Star platinum the World" as if he adopted Dio's power. What happened in the final fight with Dio?

While Star Platinum has a bad habit of pulling new abilities from underneath his loin cloth (I'm looking at you, Star Finger), I don't think it's the case here. I think it was implied that Star Platinum had the Time Stop ability the whole time.

When Jotaro confronted Dio, he quickly figured out that their stands were very similar in terms of speed, range, strength, size and what not. And once Kakyoin figured The World's secret ability, it dawned on Jotaro that Star Platinum might have a similar skill.

Of course, he couldn't trigger it easily. At first he was merely able to see glimpses of the stopped time, then he's able to move in it for a moment and only at the very end does he finaly manage to stop time on his own.

Not all stand abilities are known to their users instinctually. Even Dio discovered the Time Stop by accident while training. He also had to train his ability to extend its length and his movement in it.

While never actually explained, the most likely reason their stands are the same type is their macabre family connection. Jotaro shares a bloodline with the body Dio currenlty posesses (through the world's first vampire to human head transplant).

To put it simply: 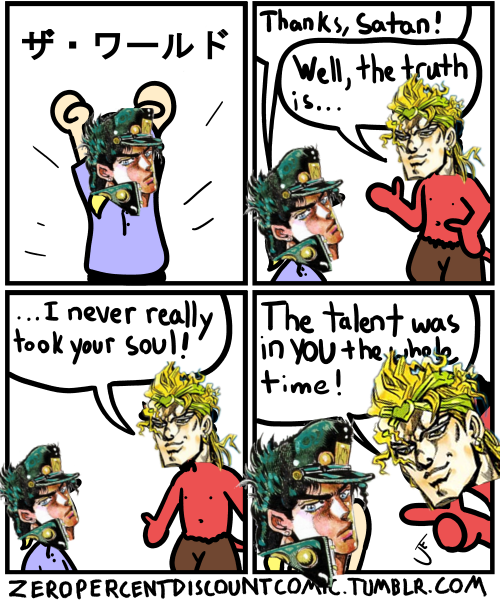 7
Translation for the ability graph
6
Why are Kakyoin and Polnareff so pleased about knowing the same hand signals?
4
Jotaro vs Dio: How can Jotaro both move and stop time in road roller fight?
11
Why did Jotaro's Star Platinum's punch destroy DIO's The World?
4
How did Kakyoin get hit by The World when he was outside of its range?
0
How does Sticky Fingers' ability work toward Pesci in Golden Wind?
1
Is Dio's The World actually allowing him to move at the speed of light?
2
How are animals able to get stands in the world of Jojo's Bizarre Adventure?
1
How fast does Star Platinum punch?
1
If Star Platinum moves as fast as the speed of light, how could Jotaro be hit by N'Doul' stand Geb?