What constitutes as an Yin/Yang/Yinyang element technique?

As we know, the Naruto "Table of the elements" consists of more than just the basic 5.

In addition to all of the combination elements, (Wood, Ice, etc), we also have the three rather bizarre Yin, Yang, and YinYang elements.

What are they? What can they do? Tobi explained that mastery over these elements allows one to basically become God, completely erasing the boundary between dream and reality. However, is that all there is to it?

Also, what is the YinYang element? Is "God" the only jutsu there?

What about elementless jutsus like Shadow Clone, do they constitute as either of the three?

This will only partly answer your question, but according to naruto wikia 1,

I thing that the phrase "become God" is used as a metaphor. According to the same wiki, the Sage of the Six Paths had absolute control over Yin and Yang, and was able to "make his fantasies come to life". This is described as 2

Yes, genjitsu is basically a subset of Yin release (Inton, 陰遁). Based on the fact that Yin relates to spirit energy, and Yang relates to physical energy, that makes perfect sense, because genjitsu techniques are basically illusions. According to the wiki again, the Yang release (Yōton, 陽遁) is "based on the physical energy that governs vitality" and 3

can be used to breathe life into form.

It's also the Yang part of the Nine-Tailed Fox's chakra that was sealed within Naruto. This causes the Yang chakra to have impact on other techniques when Naruto is in Nine-Tails Chakra Mode - namely, the Wood Release technique.

It is also implied that the elemental-less techniques, have their source in Yin and Yang (this is from chapter 316): 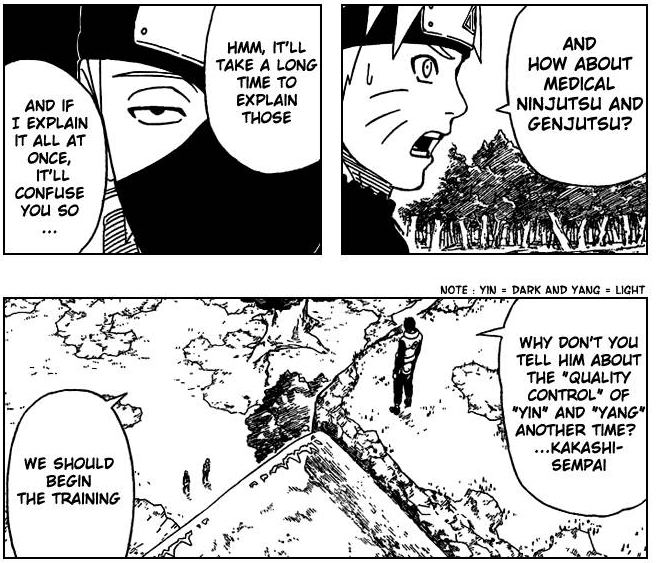 As you are probably aware, a ninja's chakra is composed of a balanced mix of his spiritual and physical energy. These two components are Yin and Yang, respectively.

The Yin and Yang nature seem to be the basis for most jutsus that do use nature alteration, but are non-elemental (e.g. genjitsu). It seems that Chakra is formed when combining spiritual and physical energy. Some people are more suited with one over the other, which might determine whether their balance of Yin and Yang naturally leans towards either side. Therefore not all jutsus require an exact balance of these two Yin and Yang. Instead varied proportions of the combined forces by different means based on the intent of the user determine the jitsu.

Jutsu like genjutsu and the Yamanaka Clan's psychic jutsu are spiritual and which focus on the mind. So they must use Yin and Yang nature alteration, emphasizing the Yin. These all seem to be jutsu which focus on extending your own chakra to your opponent and connecting your mind (e.g., implanting an illusion) to theirs. Whether it’s to implant an illusion, read their mind, or project thoughts etc. This basically uses spiritual chakra as a manifestation of your mind.

Jutsu like Shadow Clones, medical jutsu, and the Akimichi Clan's size jutsu are physical. They focus on manipulating physical substances or creating them from chakra. They must use Yin and Yang nature alteration, emphasizing the Yang.

Yoton (Yang Release) creates life force. Inton (Yin Release) materializes imagination. Onmyoton/In'youton (Yin-Yang Release) is a combination of both Yinton and Yangton (you could say the Sage of the Six Path's unique application of this is a bloodline ability). It allows one to imagine something and materialize it without giving up anything but chakra. In other words, giving form to one's imagination.

So basically, by mastering these one can become God, since he will be able to put anything that he imagines into life.

And to answer your question regarding Kagebunshin no Jutsu and the like, I'd say that they do come from the mastery of the Yin-Yang element, since they are not produced by any of the basic chakra elements, and they are indeed a product of your imagination come to life.

5
What type of chakra element does the Aburame clan possess?

24
Is it possible to combine all five chakra elements?
5
Relationship of Yin-Yang in Five Chakra nature elements
6
What is Sakura's Chakra Element?
2
What is Tsunade's chakra element?
3
What happened to the Yin half of Kurama?
12
What is Naruto's second element?
1
How do Toads in Naruto produce Oil?
0
Hidan's Chakra Element
1
Differences in Yin Naruto and Yang Naruto?
2
Do Yin Kurama and Yang Kurama have different personalities?