Why wasn't the Susanoo used?

During their fight with Kaguya, Obito, or even Sasuke didn't use their Susanoo which could have protected them from Kaguyas "Bone Ash" jutsu.

Same is the case when Sasuke fought Madara (Tobirama was lying on the ground paralysed and Sasuke jumped from above to attack Madara). Sasuke could have used his Susanoo, but he didn't.

Was this just a loophole on the writer's part? Or is there a reason behind it?

Kaguya can absorb all forms of ninjutsu, which rendered Susano'o useless. Sasuke only uses techniques like that on people who dont absorb jutsu, like Naruto. Plus, there would be no need to use Susano'o on Madara's Limbo Clone because physical attacks do not work on it. When he had chances to use Susano'o against Madara's Limbo, he didn't understand how the jutsu worked and might have felt there would be no need for its use. They have recently been putting Sasuke in situations where he doesn't need to use his stronger jutsu, like Kagatsuchi or Susano'o, which is why his fights have started taking way longer than they should be.

As for why Obito can't use it, there is literally only one manga panel that completely sums it up. 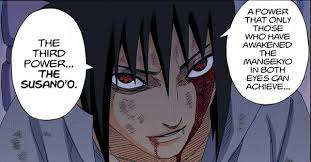 Obito had already given Kakashi his left eye by the time he awakened Mangekyou Sharingan, thus couldn't use Susano'o. Obito is later seen to get back both of his Sharingan, but since he awakened it before he had both, I guess the eyes could no longer be seen as a "vessel" for Susano'o to be used.

While battling Kaguya, the Susanoo was not a good option because of her abilities. In Episode 459 of Naruto Shippuden, Sasuke was actually using his Susanoo during the beginning of the fight. However, Sasuke stopped after he realized that Kaguya's Rinne-Sharingan ability could absorb all forms of Jutsu, including his Susanoo.

Just like Green mentioned, the Susanoo is a massive humanoid projection of its user's Chakra and so the entire Humanoid avatar can be absorbed by someone who posseses the Rinne-Sharingan, and thats actually what happened when Sasuke tried to attack Kaguya with his Susanoo, she simply absorbed the attack along with his entire Susanoo.

In the case of when Sasuke came after Madara (Episode 393), He was trying to catch Madara off guard while Tobirama kept him preoccupied, and so a Susanoo would have been a bad choice in that scanrio because of how big it is and since its a massive avatar of chakra, anyone could easily sense it.