Is Himawari's Gentle Fist more powerful than the average Hyuga's

When Himawari was angry at Boruto, her gentle fist was shown to be powerful enough to knock both Naruto and Kurama out for several hours. Even Hinata was pretty surprised at this fact. 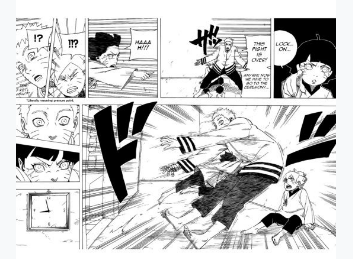 Does this imply that Himawari's ability to use gentle fist is more potently dangerous than the average Hyuga?

No; there's two things going on here, and one is a well-known thing if you've ever been a parent or near a young child.

The first thing that's going on is that Himawari was able to subconsiously activate the Byakugan out of anger. This is not contested at all; she's seen with tears in her eyes as it activates due to her favorite stuffed animal being torn up.

The second thing is that, well...little children do not know how to control what strength they have, which can result in both surprise and significant pain at the point of attack. This could be innocuous like a quick slap to the face; this could be worse like being kicked in the bread basket or lower.

The main thing at play here is that the fact that Himawari is so young and that Tenketsu is such a potent taijutsu that it caught both Naruto and Kurama so thoroughly off-guard it knocked them out.

11
What does the fist bump mean in Naruto?
4
Is sound genjutsu more powerful than eye genjutsu?
9
Does Kakashi's Sharingan use more chakra than the Uchiha clan members?
2
Why can Naruto use Rasengan more than Kakashi using Chidori?
5
What was the moral of Sasuke and Orochimaru's arcs across the Naruto series? Was there any?
0
How was Boruto able to throw the Rasengan and use Gentle Fist?
1
Is Kurama more powerful than Susanoo?
0
Why didn't Nagato give Naruto his Rinnegan?
1
How powerful are the jutsu created with Scientific Ninja Tools?
2
Is the Vanishing Rasengan more powerful than the regular Rasengan?