Who are the characters in the Audience?

In Fate/Grand Order: Himuro no Tenchi - 7-nin no Saikyou Ijin-hen we see a bunch of Servants sitting in the Audience when Kane Himuro is on stage 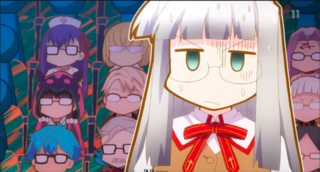 I recognize in the first image Sakura (from Fate/Extra i assume), Sakata Kintoki next to her and Hans Christian Andersen in front of her and Medusa on the far right while in the second image in the back i see the back of Mysterious Heroine X Alter and one of Medusa's sisters next to her, i think.

So i am wondering who are all the Characters in the audience and are they all Grand Order Servants? because assuming i'm right in IDing Sakura from Fate/Extra (the NPC Nurse) i don't recall her being a Servant (Sakura Matou i know is a Psudo Servant and the Fate/Extra CCC Alter Egos like Passionlip, Meltlilith and BB are in Grand Order too)

Yes, these are from what I can tell, all servants from Grand/Order.

The Sakura you're talking about in the first image is actually BB, she's just wearing her nurse dress after her Noble Phantasm animation.

In order from left to right, top to bottom, these would be:

In the back it gets a bit harder, but again from left to right:

I won't try with the row in front with that image since it's probably tougher... but as a bonus, the one with the spiky crown in front of Shuten is probably Ishtar.

Not the answer you're looking for? Browse other questions tagged fate-series fate-grand-order fate-school-life or ask your own question.

10
How do the storylines of the Fate series connect?
3
Have characters' voice actors in Fate/ always been the same?
1
Where there any other Master who didn't know their Servant's identity from the start?
2
How many character have similar appearance with Saber (Arturia)? And who are they?
6
Who are these soldiers from Rider's Ionioi Hetairoi?
0
Could one wish for omnipotence in the Fate series?
5
Was Alter Mysterious Heroine X's third form inspired from Star Wars?
3
Where do the Alter characters come from?
6
Why is Saber the “strongest class”?
4
Can anyone in the unlimited blade works use the weapons there?