Almost every Ninja's cloth (mostly Jounin and chunin gear) have the Uzumaki clan (red-swirly circlish spiral) on their backs and I've been wondering why for a while now.

The clan sybol can be seen on the shoulders and the back of the Jonin Flak jacket. 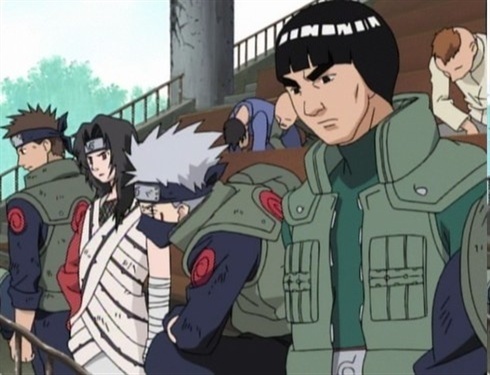 But rather they chose a clan that is affiliated with the land of eddies to be their symbol? What was the reasoning behind this.

The Uzumaki, being descendants of Asura Ōtsutsuki, also shared distant blood relation with the Senju clan. Through the years, the Uzumaki and Senju kept close ties, with members at times marrying between clans, as with Hashirama Senju and Mito Uzumaki. Following the founding of Konohagakure at the end of the Warring States Period, the Senju chose to symbolise their clans' friendship by adding the Uzumaki's emblem to Konoha's flak jackets. Konoha and the Uzumaki's own Uzushiogakure remained close allies over the following decades, with the Uzumaki providing fūinjutsu (among other things) to Konoha whenever there was a need.

14
Why do only people from the Uzumaki Clan get chosen as the Jinchuuriki for the Nine-Tails?
4
Why does Konoha have only 1 tailed beast?
9
Does Kakashi's Sharingan use more chakra than the Uchiha clan members?
5
Why does Obito look like an adult during the Kyuubi attack on Konoha?
3
What is the symbol of the Uchiha clan supposed to be?
9
The Akimichi Clan Symbol
2
Why didn't Orochimaru use the Edo-tensei in the Konoha Arc?
6
Why wasn't Jiraiya burried in the Konoha Cemetery?
2
Is there any scene in Naruto where the destruction of the Uzumaki clan was shown?