What happens to a Titan Shifter if they die without being eaten?

The question is very vague, so let me clear up some of the confusion and haze.

In the entirety of AoT, it is known that, to inherit the powers of a Titan Shifter, the chosen one must eat the current holder, absorbing their spinal fluid as they do so, as is the curse of Ymir. But what happens to the Titan abilities should the current Titan Shifter be killed in different circumstances, besides being eaten by the Inheritor of said power?

What if the Titan Shifter is killed in combat by being blindsided on the battlefield, for instance? Or dies under mysterious circumstances? Is the power still retained by the holder's corpse, or does the power "drain" away when they die?

The answer to this question can be found in Chapter 88: 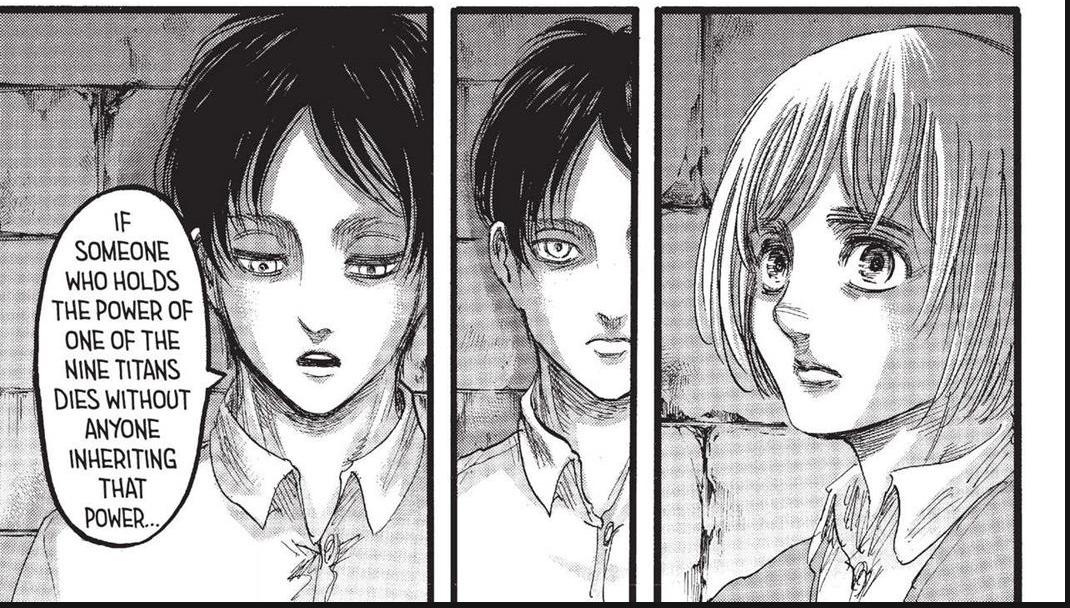 Or, to quote the wiki:

If an individual with the power of the Titans dies before it can be transferred, the power will be passed on to the first Baby among the Subjects of Ymir, who is born directly after the said inheritor's death, regardless of distance or relation to the previous inheritor.

As you can see,

as long as there are Eldians remaining in the AoT world, the power of the Titans will never vanish.

3
Are there more Titan Shifters unknown as of now?
4
If Eren Jaeger dies without transfering his titan powers, will both powers transfer to the same child?
3
Can the attack titan and the founding titan be splitted?
4
Will a titan shifter stay in their titan form if they die due to the curse?
0
How can the Armored Titan be killed if he can transfer his consciouness to his body and transform and heal?

5
How does the Colossal Titan's shifter escape without being seen?
6
Who is the 9th Titan shifter?
2
If the titan transformation is immediate once a titan eats a shifter, how did Santa Titan not become a shifter when he ate Eren?
5
Is there hard proof for the Curse of Ymir?
1
What does a Titan needs to eat from another Titan shifter to steal its power?
5
Can an Ackerman become a Titan Shifter?
4
Will a titan shifter stay in their titan form if they die due to the curse?
2
Why didn't Marcel turn into a Titan to avoid being eaten by Ymir?
1
How long can a titan shifter stay in a titan form?