What's significant about a full moon on the fifteenth?

In Joshiraku, Marii enters the room dressed as a Yankee, proclaiming that she's gonna break a load of windows since it's a full moon. Tetora responds with: 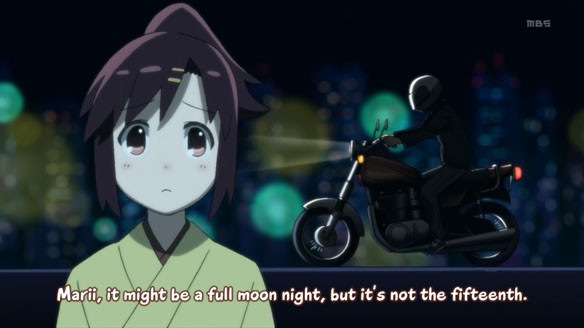 What's the significance of the 15th and why would she break a load of windows?

で、窓硝子はどこだい？
So, where are the windows?

壊して回るんだよ。
I'm going to go around breaking them.

魔梨威さん、十五夜と十五の夜は違うから。
Marii, it might be a full moon night, but it's not the fifteenth.

The last quoted line is the one depicted in your screenshot. There's a difficult-to-capture joke in this sequence, which I will nonetheless try to capture below.

Here, 十五夜【じゅうごや】 (character-by-character "fifteen-night") is translated as "full moon night". It literally just means "full moon". This originated as a reference to the lunar calendar, but now is just an ordinary synonym for "full moon".

十五【じゅうご】の夜【よる】 (the same thing with the genitive particle の interposed) is translated as "the fifteenth". A more direct interpretation of this, however, would be "a night at the age of fifteen" (an age when people are prone to "Yankee" antics).1 The joke, then, originates from the fact that 十五の夜 (Juugo no Yoru) is also the name of an 80s song, the debut single of popular singer OZAKI Yutaka, and one that has great affection for the Yankee ideology/ethos. The song's chorus reads:

Riding the bike I stole, I dash off into the curtains of the dark night, knowing not where I'm headed. I don't want anyone to chain me down as I run off into the night, feeling free at last - the night of the fifteenth.

This is why Tetora's backdrop changes from a full moon (十五夜) to a guy riding a bike when she says 十五の夜.

Alternate possibility (and probably a more likely one): Marii's lines could be a reference to a different Ozaki Yutaka song: 卒業【そつぎょう】 (sotsugyou, "Graduation"; lyrics), which contains the following line:

夜の校舎 窓ガラス壊してまわった
I went around the school building, breaking all the windows.

Note also that Gankyou's line a few seconds later may be related:

つまらない大人にはなりたくないね。
I don't want to become a boring adult.

This is an almost-direct quotation of the penultimate line from the song ガラスのジェネレーション ("Glass Generation"), by SANO Motoharu, on his album "Heart Beat" (lyrics).

1 This is probably an elision of the construction 十五歳【じゅうごさい】の夜【よる】, and is literary or poetic in nature.

This is conjecture on my part, but it probably has to do with the differences in the Western and Eastern Calendars. The western Gregorian calendar is solar based, whereas the eastern calendar is lunar based.

So based on that, she was probably saying that the moon is full, but going by the western calendar, its not the 15th.

Its either that, or they are going by the lunar calendar, and so going by the calendar, the moon is not completely full, yet. Another explanation would be there is something significant about the 15th in the anime, but I have no idea what that might be.

Not the answer you're looking for? Browse other questions tagged japanese-language joshiraku or ask your own question.

1
What's up with the name “Zerozaki Hitoshiki”?
6
What's the meaning of the title “B Gata H Kei”?
3
What's written behind the makeshift club sign?
5
What's “an OB” in the Karate Shoukoushi Kohinata Minoru manga?
13
What's a himouto?
7
Why is the series called “Amaama to Inazuma”?
5
Euros? What's so funny about it?
5
What's on the sign behind the guy with all the weapons in episode 8?
4
Why are reading fairy tales so lewd?
2
What's wrong with Kagura's pronunciation of “ka-wa-wi-i”?