Does Gogeta have a new transformation in Dragon Ball Super Broly?

This frame from Gogeta is seen in Dragon Ball Super Broly. 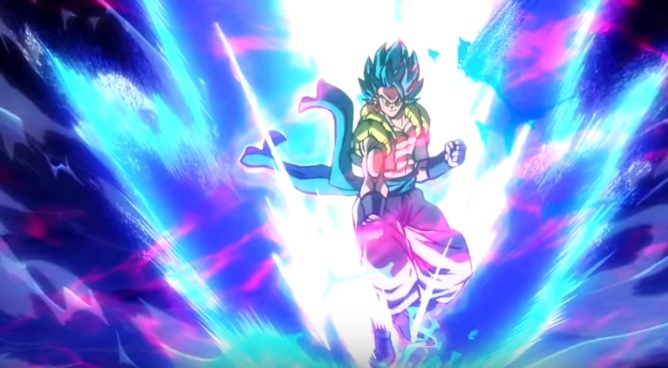 The transformation Gogeta is using here is clearly Super Saiyan Blue. We see this based on the color of his hair. The different art styles and the superior animations in the movie compared to the series, makes it appear that way. Even Xenoverse 2 just put out a trailer with Super Saiyan Blue Gogeta.
Also Note: According to new arc of DBS in the manga, Goku tells Vegeta that he hasn't been able to use Ultra Instinct even once after the tournament of power, plus, MUI has silver hair and UI Omen has the special aura with regular hair and Gogeta clearly has Blue hair here. Secondly, the hair for the SSBE transformation is a lot darker. You can look at this photograph here, of SSJB and SSBE side by side.

While the manga had the concept of the "Mastered Super Saiyan Blue" being a unique transformation, the anime doesn't. However, I think it is more or less implied that Goku and Vegeta would have perfected their use of Super Saiyan Blue by now considering the fact that Goku can effortlessly stack Kaioken * 20 on top of it and has even ascended to levels far beyond SSJB. Vegeta too has broken past the limitations of SSJB to unlock a new form. It is more or less implied Goku, Vegeta would have mastered the Super Saiyan transformations by now. However, there is no indication or change in the transformation

Firstly, regarding the picture in this thread, could it not be gogeta combining 'Super Saiyan Blue Evolution' with " SSJB Kaioken x 20"? In the fight sequence before this you see gogeta potentially using SSBE as he avoids brolys blast and then see flashes of red in his aura when he attacks.

In an unrelated comment, when Goku transforms into SSJB you see a flash of MUI. This could mean the form may be accessible in the anime later down the line.

That's my two cents on it anyway!

Not the answer you're looking for? Browse other questions tagged dragon-ball-super dragon-ball-movies or ask your own question.