Is the Degenerate skill name used as a noun or a verb?

In episode 9 of That Time I Got Reincarnated as a Slime (time code 7:44 at Crunchyroll) Rimuru uses a new skill he got from Shizu, called Degenerate. 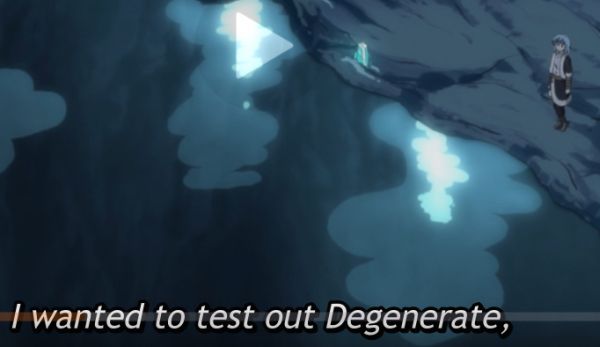 I wanted to test out Degenerate

I think this may be an awkward translation. First, its pronunciation is different between its noun and verb forms, with the verb using a long "a" sound in the final syllable. Second, most other skill names are nouns (Body Armor, Paralysis Breath, etc. -- an exception being Mimic). But as a noun, the word "degenerate" does not fit at all. The in game description is that it uses unification and separation to form a new skill from pre-existing ones. "Degenerate" as a verb can sort of fit, though not well.

Is this just a poor translation, and is it a verb or a noun? A better term for what is being described would be "Recomposition".

Some minor spoilers ahead.

I think it is a noun. Its other name is 'Deviant', which is used as a noun or an adjective. Furthermore, it was noted in the wiki that

is where the pun comes from when Rimuru teases the spirit of Shizue inside him at a comedic panel of the manga at the end of the chapter.

From these two translations, it is also used as a noun.

Degenerate, according to Wikipedia, is someone who has fallen from a previous state whereas deviant is something that departs from the norm. The skill releases properties inherent to the target, which is quiet similar to what happens when one becomes a degenerate or if someone becomes a deviant.

7
Reincarnated as a Slime -- Are the alphabets in the end credits real?
3
How did Rimuru get the human form?
3
Why did the storm dragon's name change from Verudora to Veldora in the anime?
7
What is the context for Rimuru's joke about taking five minutes for the audience to quiet down?
13
What was the “I’m not a bad slime” reference?
3
Who was the attacker targeting in episode 1?
2
In the opening song, who is Rimuru fighting in the town?
2
What are Rimuru's power in the manga or web novel?
3
In Reincarnated as a Slime, what are the approximate distances between locations, aka the scale of the map?
1
In Reincarnated as a Slime, if Rimuru gave a last name would it be beneficial?