Who is the magical girl who becomes Walpurgisnacht?

Since witches are actually magical girls who, when their soul gems are fully tainted, become witches, that means that Walpurgisnacht was a magical girl. Since Madoka in two realities became a witch that could destroy the world/universe, that would mean there was a magical girl who was, at the time, much stronger than Madoka (before Homura's trips to the past compiling Madoka's fate and power).

Which magical girl became Walpurgisnacht? Were they like Madoka, and had their fate compiled from overlapping timelines?

There is no information about who it was that became Walpurgisnacht. All we really know is that Walpurgisnacht is, in some sense, a fusion of multiple witches (or magical girls, I guess).

In the last episode we saw the "Walpurgisnacht", but what kind of witch is it specifically?

It has the destructive power to bring about natural disasters powerful enough to blow away an entire town, but originally it was a single witch. It's a witch that has grown from the combination of countless other witches. Walpurgisnacht combines with other witches in the same way two powerful tornadoes are able to combine and become larger. It's essentially a "conglomeration"-type witch. Because it's so powerful, it rarely shows itself.

An interesting question... a late answer...

I strongly disagree with the interpretation of Homura Akemi herself being the Walpurgisnacht witch. The circumstances during her wish themselves prove that Homura's not the witch.

Homura wished to re-live the time period when she met Madoka for the first time and protect her, instead of it being the other way around. She wished for this, only after Madoka (in the original timeline) died fighting the Walpurgisnacht witch. So, it is evident that Homura was not even a magical girl at that point, so forget the possibility of her being the Walpurgisnacht witch.

Also note that the Walpurgisnacht witch cannot be Homura from the "future" either, because each of the altered timeline universes created by virtue of Homura's wish are independent of each other.

In actuality, the Walpurgisnacht witch is an amalgamation/(coalesced form) of multiple witches/familiars. This can be supported by the scene where the witch disintegrates after Madoka's wish. It seems to suggest that it had resulted from 32 individual magical girls/witches... 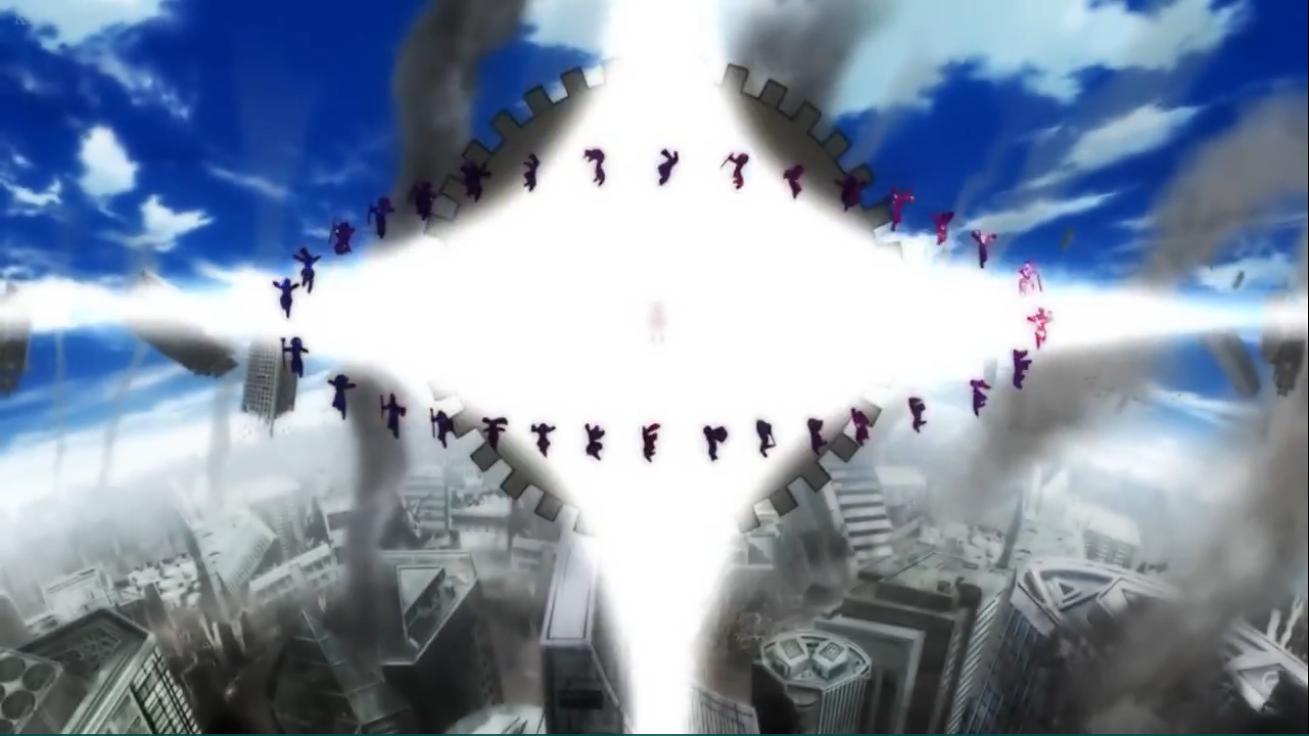 I did a bit of research, and found that Walpurgisnacht is the conglomeration of many witches into one. Akemi Homura may be a key element in Walpurgisnacht since Walpurgisnacht appears out of nowhere. This could possibly be time travel, and the witch that Homura turns into could have eaten/absorbed other witches until she became Walpurgisnacht.

Witch form of Homura (Homulilly) was presented in the PSP game and it looks nothing like her witch form from Rebellion. One can say that this means that depending on the circumstances witch form can change. Plus, Madoka's witch form (Kriemhild Gretchen) also looks slightly different in different timelines.

Nutcracker Homulilly lacks top of the head and on the concept art for Walpurgis Night you can see that Walpurgis also does not have a top of the head. Nutcracker Homulilly also has oldee-european style dress similar to dress that Walpurgis has. Gears/clock theme that Walpurgis and Homura share, similar conical silhouette, two streak hair (braid on PSP Homililly, just streaks on Nutcracker and two-hat thing on Walpurgis), plus production notes that say that "Walpurgisnacht's and Kriemhild Gretchen's silhouettes are supposed to make a pair and they are meant to look like an hourglass". All this pretty much cements Homura as Walpurgis. Regular designs of Homura and Madoka are also make pair, with Homura being black and purple and Madoka white and pink (purple being basically pink with a lot black and gray added to it).

Also, facts aside, thematically there is no reason for Walpurgis to be anyone else beside Homura. If Walpurgis is Homura it creates dramatic irony of Homura fighting with herself and more she grows stronger the stronger her enemy becomes. And trying to save Madoka from her dark side Homura more and more corners Madoka into basically suicide. From the literary stance Homura being Walpurgis makes perfect sense, especially after "Akumura" is created. "Trying to fix everything you only make it worse and probably things would be better if you leave them alone" seems to be a theme with the series in general and especially Homura.

I'd assume it was someone who had a lot of ties of fate, maybe one of the queens of England, since her outfit would fit their attire. I'd also assume it could have been the same situation that Madoka and Homura had, or she could have wished to be the most powerful magical girl of all time, and turned to Walpurgisnacht.

Basically, Walpurgisnacht is a Witch that is to be blunt like a Cluster of Witches and it came to be from a single witch that was just either left to its own devices until no solitary Magical Girl could handle it.

That is to say she appears and at that point she also attracts Magical Girls to kill her as she is a reference to the gathering of witches. She is never really explained but we know she isn't Homura nor has she been seen as a Magical Girl. We do know that she could be like Madoka and have made a wish so selfless it made a wish with a curse equally as big as her wish. For example, a queen wishing for her countries prosperity and then she is hung or beheaded by the very people she made a wish for.

TatsumiTatsumi
1
0
Add a comment  |
Highly active question. Earn 10 reputation (not counting the association bonus) in order to answer this question. The reputation requirement helps protect this question from spam and non-answer activity.

6
Are Homura's wings witch wings in the end?
11
Are all wishes actually possible?
7
Where do the terms "Law of Wheels/Cycles" come from?
9
Why was there an apparent violation of the law of cycles in Rebellion?
9
How come the events of Rebellion are possible, with Madoka's wish?
2
How do Soul Gems get corrupted over time in Madoka Magica?
7
When Kyoko overloaded her soul gem to kill Sayaka's witch form, did Kyoko then also become a witch?
7
How did Homura able to return to a past where Madoka isn't already a Magical Girl?
1
Can the Law of the Cycle destroy itself?