Who was Levi's host?

Spoiler alert! Do no proceed unless you are up to date with the manga or you don't mind being spoiled.

In Chapter 112 of Shingeki no Kyojin, according to Eren, the Ackerman are able to unleash their power when their host are in danger and they will often have headaches as their inner self fights against the instinct of the Ackerman blood.

He then told Mikasa that her tagging along wherever Eren goes is just from her Ackerman blood as Eren is her host.

Levi is also an Ackerman and as seen multiple times, he is capable of nearly inhumane feats such as slaughtering a horde of Titans all by himself. My questions is, who was Levi's host? Was it Erwin? If so, do we have proofs that it was him?

For Levi, that person is Erwin. He has acknowledged Erwin as an existence who he looks up to. It’s part of the Ackerman bloodline, or an instinctive part of them, you could say.
source: Hajime Isayama, book of answers

I think the answer is pretty obviously Erwin Smith. Erwin was one of the only people Levi respected unconditionally, and from whom obeyed every command showing Levi's immense trust in Erwin. Additionally, right before the Return to Shiganshina Levi threatened to break Erwin's legs to make sure he couldn't go into battle to make sure Erwin wouldn't die. So yeah, it seems that Erwin was Levi's "host."

That being said, Levi's connection to Erwin disproves Eren's belief that the Ackerman's (Mikasa) are slaves/cattle with no free will. Because despite the fact that Erwin was seemingly "Levi's" host, when having to choose between Armin and Erwin to save Levi still chose Armin meaning that Ackerman's despite imprinting onto someone like Uri for Kenny, Erwin for Levi, and Eren for Mikasa are still able to make choices of their own free-will that could endanger or even kill their "host" like Levi did of Erwin

There is no proof that this connection Ackerman-host does actually exist. Furthermore in the latest (118) chapter:

Armin speculates that Eren made that entire thing up in order to convince everyone that he is siding with Zeke. 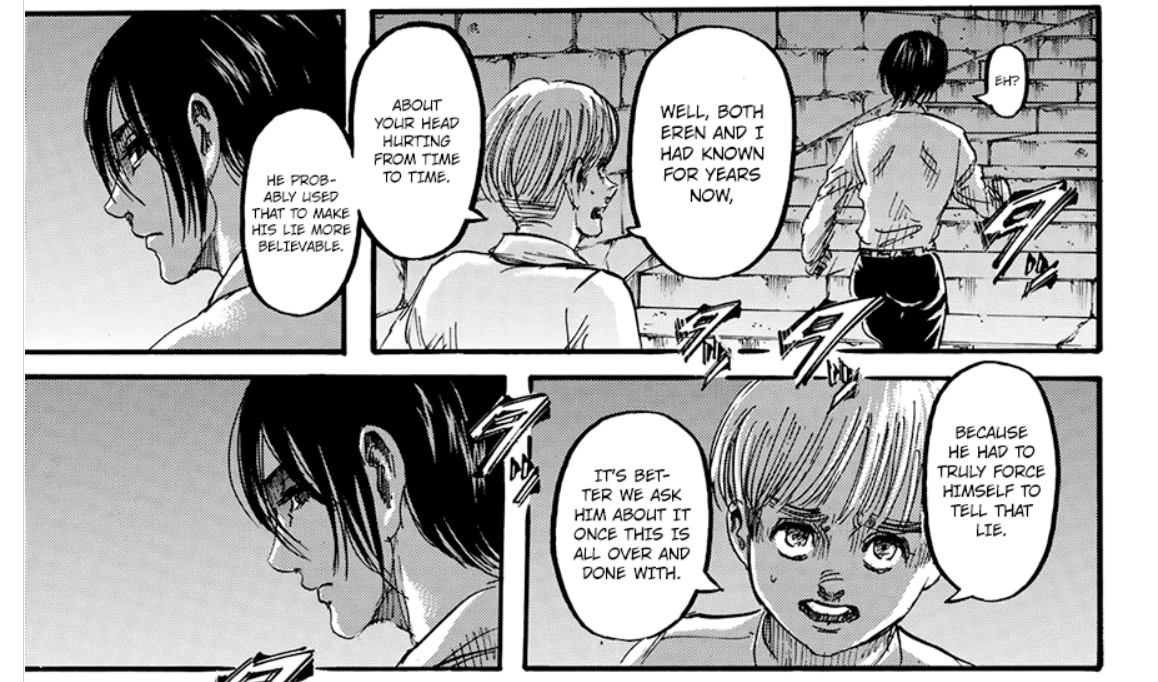 18
What was Eren's vision about?
8
Who was Annie apologizing to in episode 13?
6
Who is the 9th Titan shifter?
9
Who was the other person the colossal titan ate?
3
Who are the wall cultists?
7
How did Annie know Armin was lying?
0
Who would obtain Coordinate's ability if Historia was killed by the MP?
2
Who was the Beast Titan before Zeke, and can he turn into different animals?