What is the significance of fifteen strokes in a name?

In chapter 3 (titled Savior) of the manga Shurabara!, I don't understand the meaning of certain lines in there:

"I absolutely cannot accept someone like you, Yagimoto Kazuhiro, who only has fifteen strokes in his name!"

Is it rare to have fifteen strokes in a person's name or is it a joke? What does she mean? 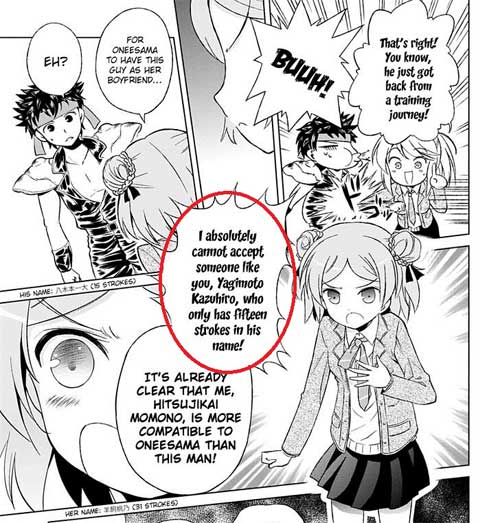 It is a cultural thing, but parallells can be drawn with other cultures of course. Some consider(ed) characters with more strokes to be more classy and aristocratic. Which goes back in history, peasants had shorter and more simple names—often practical in their nature. While the rich could have several names, with rich symbolism, more abstract meaning and sometimes exotic pronunciation.

Some of the really aristocratic families in olden times actually created their own characters so they could be really unique (often by adding a stroke or two to an existing character or by combining two or more existing characters into one). This is actually referenced in many Japanese/Chinese dramas where a name can be “taken” from someone by removing a stroke or character, as well as adding a stroke to the (real/adopting) father’s given name so that the relation father–son could well be seen, as well as adding rich philosophical ideas to the relationship. For example, consider the anime movie Spirited Away where the protagonist Chihiro has part of her name taken away by a witch, which then becomes Sen (while the pronunciation differ, the character 千 sen is actually the same as chi- in 千尋 Chihiro).

But back to the number of strokes. There is one Japanese belief (not sure how widespread) that it is good fortune to have the same number of strokes in your given name and the family name (not seldom combined with similar meaning and/or pronunciation). That, and that some numbers in themselves are considered either auspicious or inauspicious are additional aspects on the stroke count. (For example the number four is considered ill-lucky as it can be pronounced the same as 死 shi “death”, while the number eight is one of the more lucky, a heirloom from the Chinese culture.)

That is 11 strokes in the surname and 4 strokes in the given name (15 strokes total). Ordinary characters, low stroke count, common pronunciation and very concrete, everyday meanings. It’s hard to get more low profile than this, naming-wise!

That is 19 strokes in the surname and 12 strokes in the given name (31 strokes total). The double of Kazuhiro’s. When it comes to the meaning and pronunciation of Momono’s characters they are somewhat more “refined” than Kazuhiro’s. It adds to the feeling of a name belonging to someone more important. Which I guess is what the mangaka is trying to achieve, name-wise. Of course, a childish game, but yet an important one if you are insecure in your own place.

He he, I was only going to write a sentence or two. And still, there is much more to be said. If you wish to know more, take a look at Japanese folktales and history.

Not the answer you're looking for? Browse other questions tagged shurabara or ask your own question.