Mjolmire and what does it profit a man?

At time-code 20:45 of episode 21 of That Time I Got Reincarnated as a Slime, the merchant Mjolmire is considering Rimuru's offer to go to his capital city and help teach the folks there about trade. He says something I find strange: 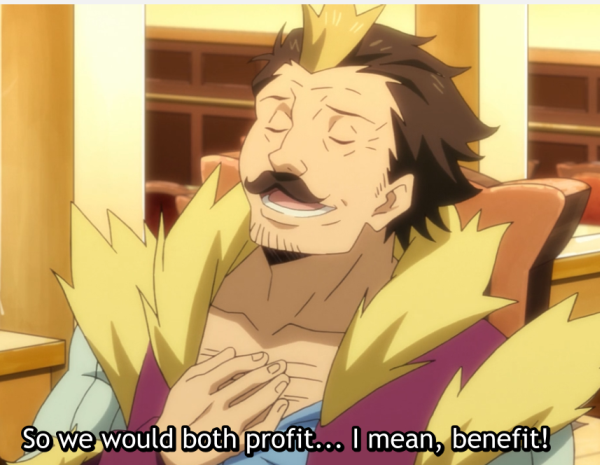 "So we would both profit... I mean benefit!"

Why would he feel the need to reject the word "profit"? It seems perfectly natural to me. Rimuru's nation might be an ideal communist society (debatable point) but even communists would understand that a traveling merchant seeks profit. Or is the issue something else entirely?

The whole merchant part of the manga/LN changed in favour of ending the anime at a certain point. That line isn't even in the manga. That is why there will be two answers to this question:

Anime-only: Rimuru is the representative and the highest ranked official in his country. Usually while doing deals like this, you have to pick your words carefully such as this example. You should seek things that will benefit your country and people live in there. A corporation, on the other hand, should seek profit. Profiting is a financial type of benefitting. However, this merchant aims higher than just financial gain which brings me to manga spoilers.

In his word, the merchant simply wants to "invest in Rimiru". As we know, the country Tempest is trading very high-quality potions and geographically placed in a very good trade route. Knowing the leader of this country won't simply profit you, but there are many more merits/benefits to that. So he is betting on this idea.

4
What is Japanese version of the pun word, "slife"? ... and term for adult friend?
7
What is the context for Rimuru's joke about taking five minutes for the audience to quiet down?
13
What was the “I’m not a bad slime” reference?
2
What are Rimuru's power in the manga or web novel?
3
In Reincarnated as a Slime, what are the approximate distances between locations, aka the scale of the map?
3
Dragons and Magicules