What was Hirohiko Araki's inspiration to create JoJo's Bizarre Adventure?

I was wondering what was Araki's inspiration in creating this manga? How did this idea came into reality? Also, how did he came up with the 'Stands'?

I have yet to read the manga or watch the anime but a quick research I did shows that the inspiration of JoJo's Bizarre Adventure can never be attributed to a single person or thing.

This quite long article discusses how JoJo's Bizarre Adventure is inspired by David Bowie and other famous rock bands, songs and movies. To quote from the article:

The three Bowian themes of pushing genre boundaries, creating unique and flamboyant aesthetic identities for characters and personae, and pursuing a degree of self-reflexivity can be found in JoJo, as themes at least indirectly inspired by Bowie’s artistic endeavors.

In addition, you can see below one of the many comparisons done by the article of poses from one of the characters in the manga to a famous pose done by David Bowie. 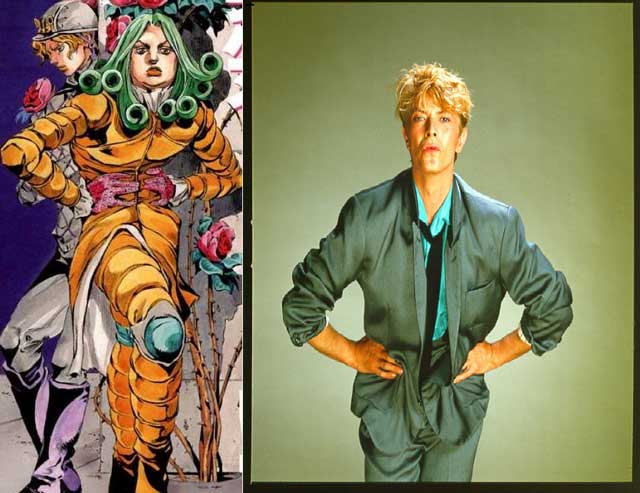 ...stands are usually named after rock bands, albums and songs...Dirty deeds done cheap (from an AC/DC song)...the stand Soft and Wet (a homage to a Prince song)... a stand called Scary Monsters, an obvious homage to Bowie’s classic work... Killer Queen, bears the name of a Queen’s song

Aside from music, films also influenced the manga. In this article, Hirohiko Araki revealed in an interview how Blade Runner heavily inspired his creation.

He said that Blade Runner's Roy Batty, as portrayed by Rutger Hauer, influenced the character DIO in his manga. In particular, he mentioned how Batty's short blond hair and muscular build influenced DIO.

9
Why does Jojo's Bizarre Adventure have so many English references?
2
How does Star Platinum get the same ability as the World?
3
How did Kakyoin get hit by The World when he was outside of its range?
1
What happened to Fugo in Episode 18 8:35?
1
Where and how was Diavolo hiding where he was after the body swaps of Silver Chariot Requiem?
1
Is Dio's The World actually allowing him to move at the speed of light?
2
How are animals able to get stands in the world of Jojo's Bizarre Adventure?
3
Would a fan made universal exstension be allowed to post?
1
If Star Platinum moves as fast as the speed of light, how could Jotaro be hit by N'Doul' stand Geb?