Apparently, in Chapter 112 of the Attack On Titan manga, Eren says that Mikasa is a slave. For all their life it seems they have been friends. Has their friendship been broken because of this?

Also, if possible, leave some theories as to what may happen between the two, e.g. a fight.

Warning: Some spoilers below.

If you look at the succeeding pages of Chapter 112, Eren does indeed say that he hates Mikasa and revealed that he has done so ever since they were kids 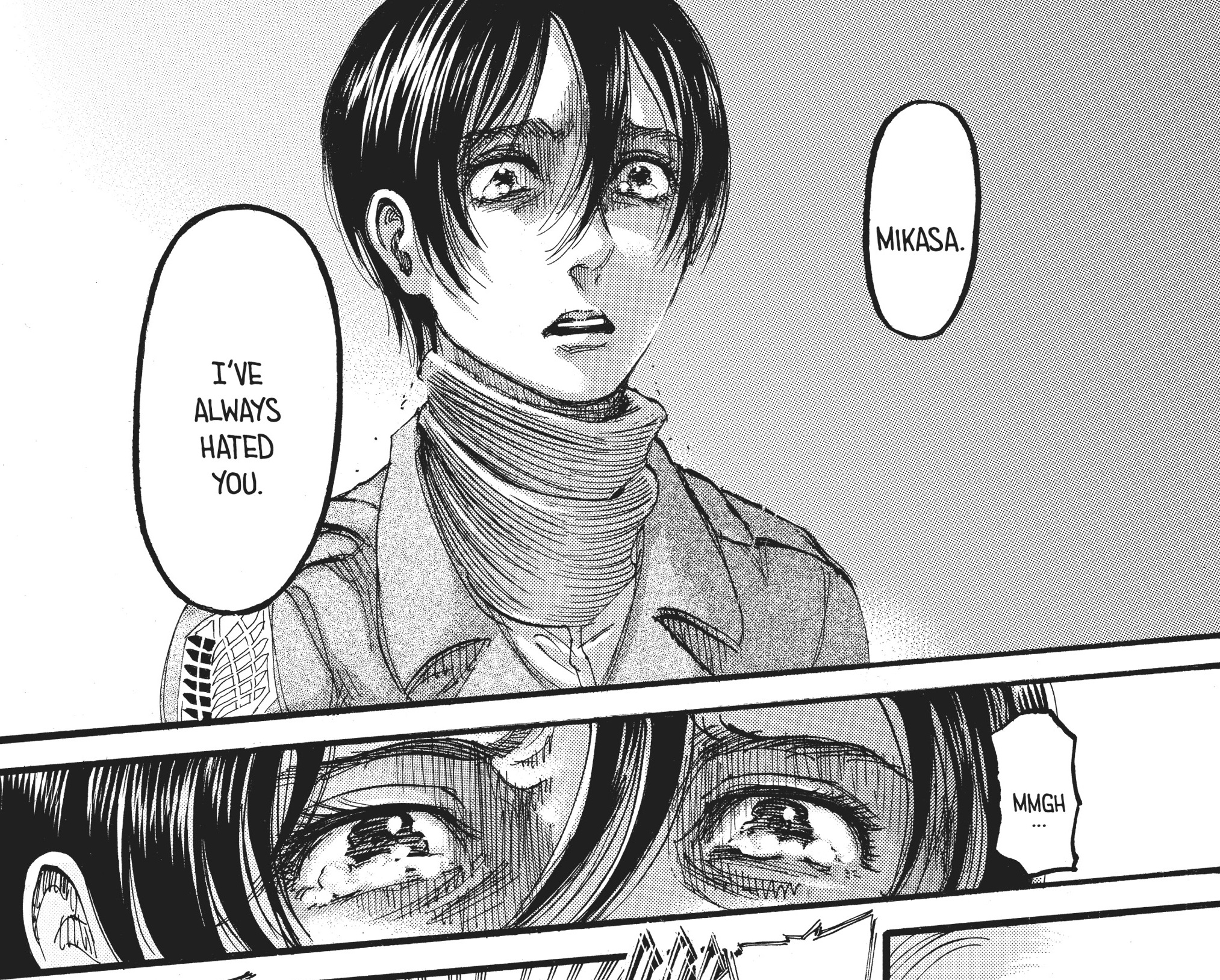 Whether he means it or not, however, is a different matter altogether. He could or could not be lying. The reason for him doing so or if he did lie, we cannot know yet as of now due to lack of information.

it was revealed that Eren and Zeke had a talk, with Eren agreeing to Zeke's plan of genocide to wipe out the Eldian race. The reason being that if they were never born in the first place, there would be no suffering and Eren views it as their 'salvation'. Him pushing away everyone he knows, including his two close friends, Armin and Mikasa, was probably to ease the pain he would feel and sever any attachment or feelings he felt towards the two, knowing that he would be responsible for their deaths soon, if their plan succeeds.

Would it be possible for Eren and Mikasa to fight? This is speculation but I think this can be substantiated by facts mentioned in Chapter 112. In that same chapter,

it was revealed that Ackermans awaken their powers when they recognize someone as a 'host'. Eren was recognized by Mikasa as her host and someone she had to protect so I doubt that she would be able to hurt him. Even when Eren said those harsh words and Armin was about to punch Eren, Mikasa still stopped Armin, following her clan's 'instincts' when awakened.

I have reason to believe that it is quite the contrary. I feel that I can prove that Eren actually loves Mikasa. Even in a romantic way.

SPOILER ALERT . . . In chapter 120 Eren reveals to Ziek that he "only went along with (him)" to get to Ymir and that he "would never partake in such a joke of a plan".

This clearly means he purposely hurt Mikasa and Armin in order to push them away especially because he knew that Mikasa would try to protect him and get herself in trouble by doing so this time. He didn't want to reveal his plans to anyone and kept everythjng to himself which is actually typical of Eren who has always wanted to be the 'lone wolf' independent kind of hero.

Now when he gets his head blown off by Gabi's thunder bolt [in chapter 120 again] we get a flashback of memories... As though these are Eren's last thoughts before a supposed death. Now if you look closely at these memories, you can see many of the people and experiences that influenced Eren's life, including Armin as a kid, Levi, the warriors, Annie, his mother, a few scenes from his childhood, some recruits, the commander... But one striking difference is that the largest image which occupies the most space in his thoughts is the memory of Mikasa looking back at Eren while carrying wood on her back as a child. Her hair flows and leaves are falling all around her. This clearly depicts a soft romantic image of a girl who is not usually very soft and fragile... If Mikasa was just a comrade or motherly figure to him, I believe his memory of her could be depicted in a very different way, for instance of her fighting for him, trying to protect him or at least wearing her gear as a soldier. But instead, we get this soft (fairly large) romantic image of her looking back at him. That to me my friend, is proof that Eren actually does love Mikasa and not in a brotherly way. Wether he knows it or not, subconsciously the creator believes that the character of Eren is in love with Mikasa, wether he intended to indicate this or not.

Through this manga, I feel that Hajime is showing that although he has no conscious intention of placing these characters together romantically, he is unintentionally and subconsciously exposing Eren's feelings about Mikasa through very hidden messages that perhaps, even he himself did not intend to show. 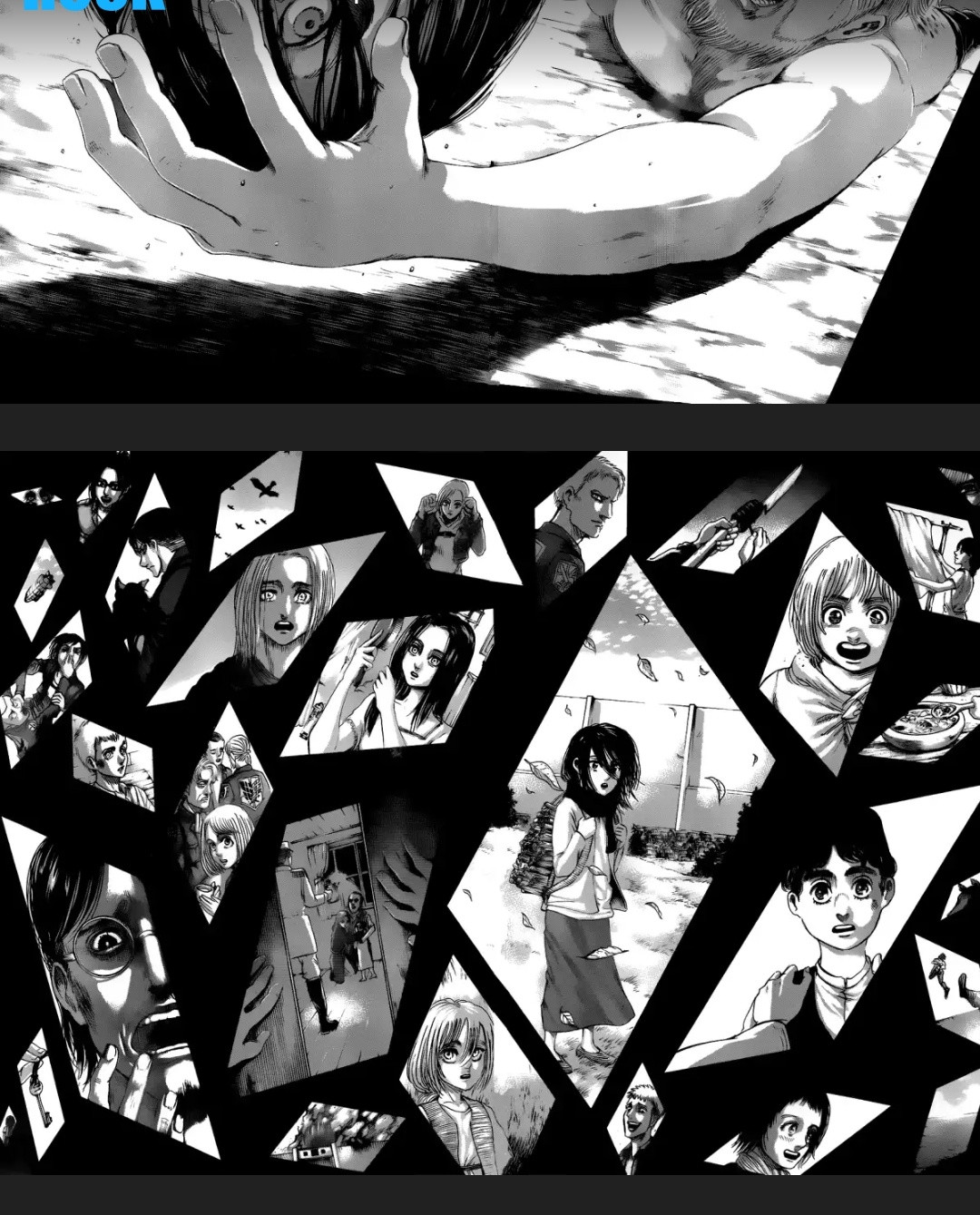 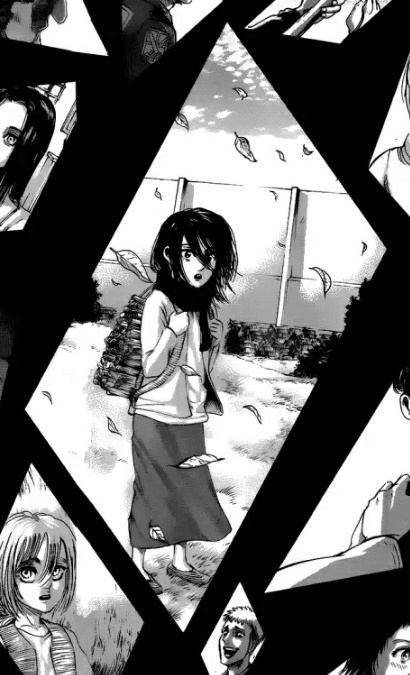 Rachael BRachael B
1111 bronze badge
Add a comment  |
Highly active question. Earn 10 reputation (not counting the association bonus) in order to answer this question. The reputation requirement helps protect this question from spam and non-answer activity.

9
Is Eren immortal?
10
Where is Eren's father Dr. Jaeger?
3
Are Levi and Mikasa siblings?
5
What did Mikasa say when she was correcting Armin after Eren mastered the ODM gear?
3
What does Mikasa mean by “It's happening again” in the 2nd episode?
6
What does the title of first chapter of Attack on Titan (進撃の巨人 Shingeki no Kyojin) mean or signify in the context of manga?
2
Why are Eren and Mikasa shown not to be in the Walls in some flashbacks?
7
Why does Eren loses his equipment after being Titan?
4
S1 EP20: How did Mikasa know Armin said Eren might be in the rear of the centre rank of the formation?
5
Can an Ackerman become a Titan Shifter?