How come Abra was able to evolve in episode 22?

As far as I know, pokémon can evolve when they gain enough experience or while using a specific item.
There are also some rare cases that involve specific emotions/weather.
However, I'm sure none of these was the case.

So in episode 22 in season 1, how was it possible for Abra to evolve within the match, when he didn't even gain any EXP from it?

In the anime, evolution is a bit different to evolution in the games. For example, Pokémon do not evolve when traded and can refuse to evolve.

If you look at the list of evolution in the anime, you'll find many Pokémon that did not evolve after a battle. It's more like they constantly gain experience and can sometime decide that they want to evolve now, mostly when it's needed. Also, the idea of "levels" aren't very much used in the anime, so I don't think it really matters. It's just a mixture of emotions and experience.

Sabrina, the Gym Leader of Saffron City is a Psychic and a powerful one at that, her pokemon Abra/Kadabra is psychically-linked to her, it wouldn't be too much of a stretch to think that Sabrina could force her pokemon to evolve with her powers, also in the anime she only had Abra/Kadabra and Ash won thanks to Haunter causing her to laugh, the psychic link to Kadabra caused him to laugh unable to fight making Ash the victor

in the original Red/Blue/Green, she had 4 pokemon and Alakazam was her strongest, in the original Yellow she had 3 which was Abra, Kadabra and Alakazam, all level 50 however Alakazam is most likely the strongest because the only move it has different is Reflect which doubles defense over Kadabra's Kinesis which decreases accuracy on the target, none of this is shown in either battle Ash has with her so there is a clear difference between the anime and game

Once I rewatched the episode I had in mind the simple answer - she timed the evolution of Abra exactly at the start of the battle, she knew, whether with Abra's experience or knew with her psychic power he will evolve.

For the first option, it's not very far to say that trainer can know when his Pokemon will evolve in the anime, I don't remember now which episode, but in one of the episodes in the Advanced series, there was one who his Pokemon just evolved and said "I knew it is about time he will evolve", showing that trainers might know when their Pokemon is about to evolve.

But the second option she knew with her psychic power Abra will evolve during the battle even have an evidence in the episode: 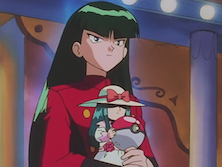 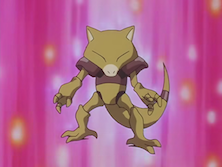 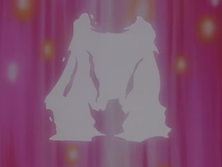 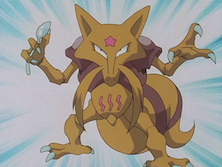 We see that as soon Sabrina is "glowing blue" with her psychic power, Abra is glowing too and evolving. it might even imply she used her psychic to make it evolve (which is like Memor-X answer).

9
What did Team Rocket use to evolve Rhyhorn?
5
How does Nincada evolve into Shedinja?
13
Why didn't Pikachu evolve?
13
Where did the phrase "Gotta catch 'em all" come from?
7
How can Mewtwo Mega Evolve?
1
Why was Ash's Pokedex replaced?