Is it necessary for Amestrians to die for the transmutation circle?

Throughout FMA: Brotherhood, fighting has been breaking out, having been orchestrated by the Homunculi to power the giant transmutation circle that makes up Amestris. In most if not all of the fighting, it seems to be that the Amestrians are suffering great numbers of casualties. The fighting at Fort Briggs, for example, was orchestrated so Fort Briggs would be weak so they could be massacred. It is necessary that Amestrians to die for it to work and that is why it is being set up so they are on the losing side, or is there some other reason, like it is easier to make the Amestrians lose?

No, it doesn't have to be Amestrians.

In fact, the fighting at Fort Briggs was orchestrated so that there were casualties. Kimblee was told by Pride that he simply had to create the blood crest. Kimblee knew that Briggs was stronger than Drachma, so he lied to the Drachmans and told them that Briggs was vulnerable, resulting in their entire army being destroyed.

In most of the other wars, in fact, Amestris was victorious. You have to remember that Amestris started as the green area in the map below. 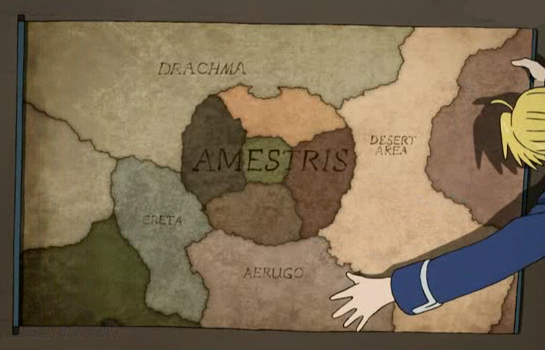 They colonized the rest of the area around them (numerous existing places, some are listed in the Fullmetal Alchemist Wiki's article on Amestris) to enlarge the country for Father's ultimate purpose, in order to gain the amount of souls necessary. These victories often resulted in the deaths of far more innocent people and opposing armies than Amestrians.

So, to answer your question directly, no, it is not necessary that it is Amestrians who die for the transmutation circle. In fact, Drachmans, Ishvalans, and many others have been the victims of bloodshed for the hundreds of years prior to the Promised Day.